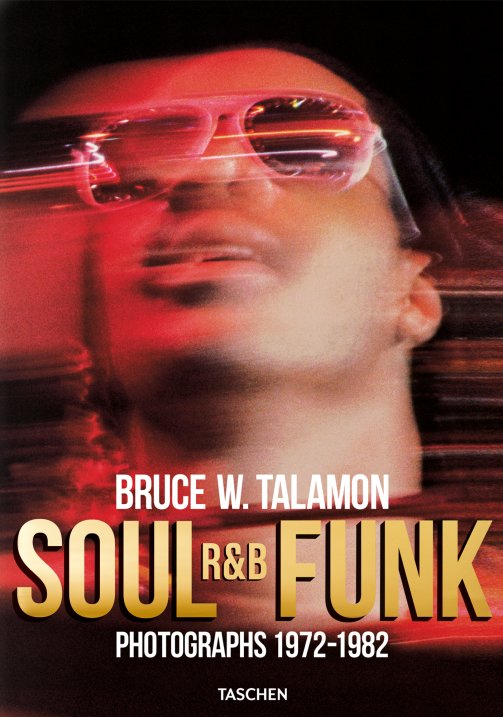 A decade's worth of funky photographs – served up here in a completely massive book! Photographer Bruce Talamon was clearly the man on the scene in the 70s – able to gain access to some of the best soul and funk artists of the time – both onstage and backstage, with some great studio and candid work as well! The photographs are amazing – completely unfamiliar, but very iconic – images of James Brown, The Jackson 5, Marvin Gaye, Earth Wind & Fire, Barry White, Minnie Riperton, and many other of our favorite acts from the 70s – served up here in both color and beautiful black and white images. It's almost as if these photos were waiting decades to finally get the Taschen treatment – as they look fantastic in the setting, and offer us a vision of the world of 70s soul that we might never have seen otherwise. Way more than just another music photo book – a huge work of art – with 375 oversized pages, in a super-heavy volume!  © 1996-2021, Dusty Groove, Inc.

Rock Covers (hardcover) (40th Anniversary edition)
Taschen, 2015. New Copy
Book...$19.99 25.00
A super-huge book of classic album covers from the 60s, 70s, and beyond – not just famous images, like the one pictured on the cover – and instead a very thoughtful collection of rock record shots from both the mainstream and the underground, with an especial eye for the kind of ... Book

Toys – 100 Years Of All-American Toy Ads (hardcover)
Taschen, 2021. New Copy
Book...$30.99 40.00
A very beautiful book – and one that's maybe as creepy as it is colorful, given that it presents hundreds of older advertisements for toys – some completely delightful, but some a bit chilling too! The variety of material here is wonderful – a mixture of American and European ... Book

Frank Sinatra Has A Cold (hardcover)
Taschen, 2021. New Copy
Book...$53.99 70.00
A fantastic presentation of a fantastic piece of writing the famous title essay by Gay Talese from 1965 – written after the author was continually rebuffed from getting an interview with Frank Sinatra, but was able to witness the world around him in the process! The work is a stunning ... Book

Jazz – New York In The Roaring Twenties
Taschen, 2021. New Copy
Book...$30.99 40.00
A beautiful look at the early years of jazz – served up here in a set of portraits drawn by the author, which are interspersed with bits of history and the stories behind their music! There's a really unified feel to the drawings of Robert Nippoldt – who takes a style that's somewhere ... Book

Art Record Covers (40th Anniversary hardcover edition)
Taschen, 2017. New Copy
Book...$19.99 25.00
A beautiful book that traces the intersection of art and commerce in the field of the record album cover – as museum-level creative talents from Salvador Dali, to Albert Oehlen, to Raymond Pettibon all got their time in the record racks – as you'll see in this huge book of full-color ... Book