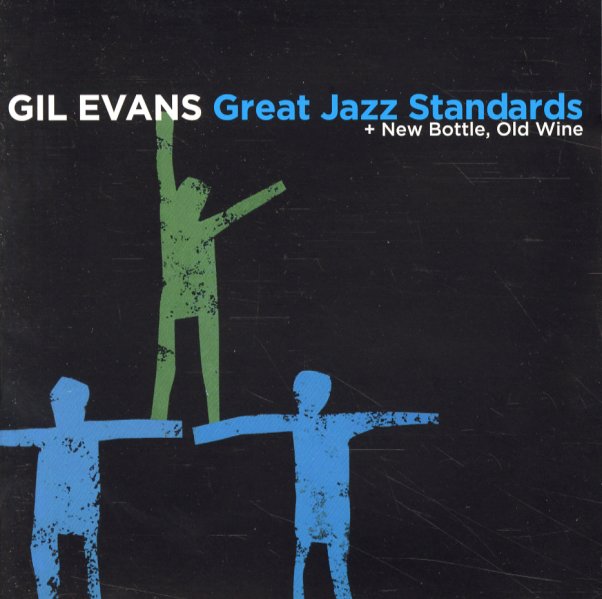 Great Jazz Standards is a fantastic lost set from Evans – one that features Mingus trumpeter Johnny Coles as the lead soloist in front of Evans-led modern groups that include players like Elvin Jones, Ray Crawford, Steve Lacy, Budd Johnson, Rod Levitt, and Chuck Wayne. Despite the "standards" in the title, most of these numbers are modern tunes from the 50s – like "Joy Spring", "Ballad Of The Sad Young Men", "Django", "Straight No Chaser", and "Chant Of The Weed" – all given Evans' unique style of arrangement, tweaked up a few notches to give them a really edgey quality. Coles is clearly standing in for Miles here, but the format works well overall! New Bottle Old Wine, is a masterpiece through and through from arranger Gil Evans – a record of swinging modern backdrops, used to showcase both the solo talents of a young Cannonball Adderley, and the dynamic energy of Evans himself! Cannon's sharp-edged early tone is a really great sound for the record – far more modern than you might expect from later funk and soul sides of the 60s – and perfectly poised next to Gil's larger back drops to reignite a host of older tunes with new energy! And while the titles are familiar, the readings certainly are not – as the Evans pen has really changed things up beautifully – as you'll hear on numbers that include "St Louis Blues", "King Porter Stomp", "Willow Tree", "Struttin' With Some Barbeque", "Lester Leaps In", "Round About Midnight", "Manteca", and "Bird Feathers".  © 1996-2022, Dusty Groove, Inc.

30 Years Outside The Box
Sony, 1970s/1980s/1990s/2000s. Used 90 CD Box Set
CD...$149.99
A beautiful collection of 88 original albums by Yo Yo Ma with 2 discs of bonus tracks. The CDs come in LP-style sleeves with original artwork. The set also includes a nice 312 page hardbound book filled with plenty of color photographs, essays, notes from Yo Yo Ma's many artistic collaborators ... CD