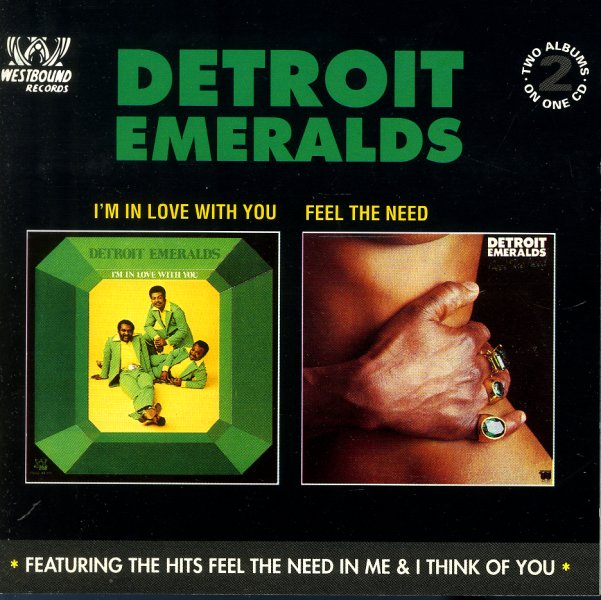 I'm In Love With You/Feel The Need

The Detroit Emeralds' last two albums for Westbound – back to back on a single CD! I'm In Love With You is maybe our favorite album by this Detroit soul group. Why? Well maybe it's because of the great lime-green suits they're wearing on the cover, but probably because they've really got their act together on this one, and lay down a tight set of soul cuts, that have all the great harmonies of yesteryear, mixed with a sweet funky sound that's right on the Westbound tip! The album features the great breakbeat track "You're Getting a Little too Smart", which begins with some excellent drums – and it also includes the cuts "Shake Your Head", "You Control Me", "Without You Baby", and "Heaven Couldn't Be Like This". Feel The Need is an excellent bit of modern soul from The Detroit Emeralds – one of the few older Westbound groups who successfully made the transition to the label's smoother sound of the mid 70s! The feel here is really great – smooth, slinky, and seductive grooves – often done in a midtempo way that still lets the group's harmonies come through nicely. Titles include the monster groover "Set It Out", which has a killer hook, and a tasty midtempo groove that's about the best thing you'll hear from Westbound after 1976! Other titles include "Take It Or Leave Me", "Sexy Ways", "Love For You", and "Love Has Come To Me".  © 1996-2023, Dusty Groove, Inc.