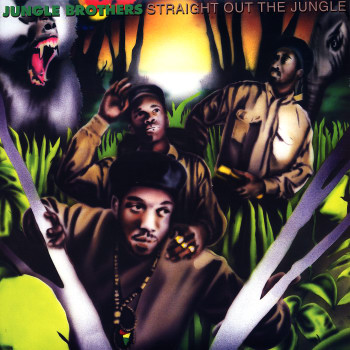 A fantastic set from the late 80s – one of the first records to really herald the new generation to come with De La Soul and Tribe Called Quest – served up by Native Tongues partners The Jungle Brothers! While this set never got the major label push that debuts by the other groups would have, the set was an instant sensation in the world of hip hop – the start of a new level of wit and wisdom – urban sensibility able to look back at itself, almost a postmodern commentary on the then-short history of hip hop! Production is great – and the JBs not only reworked use of classic samples, but also added a newly jazzy sensibility – on titles that include "On the Run", "Straight Out the Jungle", "Black Is Black", "Braggin & Boastin", "Behind The Bush", "Because I Got It Like That", and the classic "Jimbrownski".  © 1996-2022, Dusty Groove, Inc.
(RSD Essentials pressing. Quantities pressed on demand and strictly limited!)