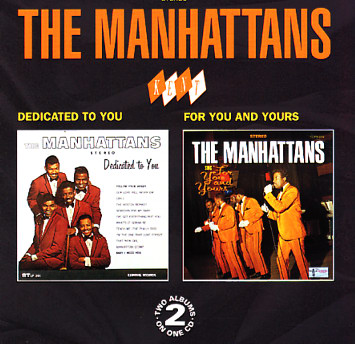 Dedicated To You/For You And Yours

Masterpiece soul material! The Manhattans in the 60's were an amazingly precise group that managed to swing, yet still hit a totally soulful groove. This CD presents their first two albums in complete form, features 24 solid tracks, nearly all of them original compositions – and the sound is completely wonderful, a harmony soul fan's delight! Unlike other acts of this nature, too, the group never really recorded any filler – and all the tracks on the set are as great as the singles that formed the bigger hits at the time. Titles include "Follow Your Heart", "That New Girl", "Searchin For My Baby", "I Call It Love", "I Betcha", "There Goes A Fool", "Baby, I'm Sorry", "For The Very First Time", and "I Wanna Be".  © 1996-2022, Dusty Groove, Inc.