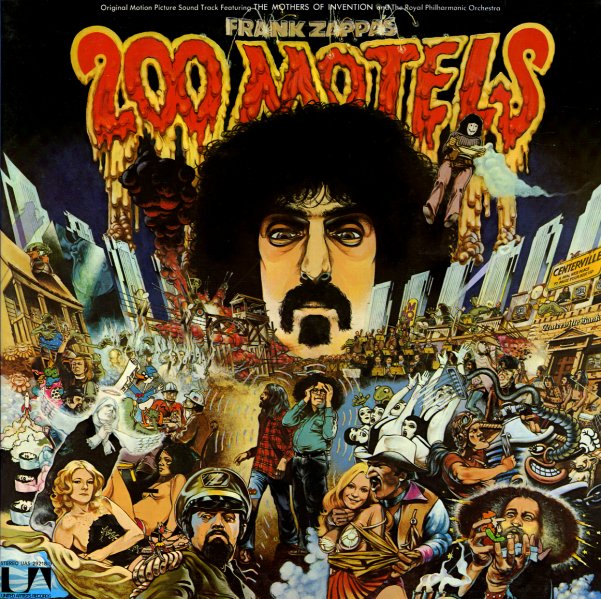 A pretty striking little record in the Frank Zappa catalog – the double-length soundtrack for the movie of the same name, and a set that explodes the Zappa palette of sound even further than some of his previous albums! A number of tracks feature a full studio orchestra – sounding as if they were lined up to perform a conventional Hollywood film score, but somehow tricked into working with Frank when he showed up on the podium to conduct the proceedings! Other tunes echo more of the Mothers Of Invention material, but with shorter selections, and lots of twists and turns along the way – all of which make the whole record this really mad pastiche of songs, sounds, and sonic interplay. Titles include "This Town Is A Sealed Tuna Sandwich", "Redneck Eats", "She Painted Her Face", "Janet's Big Dance Number", "Daddy Daddy Daddy", "The Girl's Dream", "A Nun Suit Painted On Some Old Boxes", and "Mystery Roach".  © 1996-2022, Dusty Groove, Inc.
(50th Anniversary Edition – new remastering, and bonus replica poster!)

Taking Out Time – The Complete Recordings 1967 to 1969 (With Their New Face On/Round The Mulberry Bush/Funky/BBC Sessions/bonus tracks) (3CD set)
United Artists/RPM (UK), Late 60s. New Copy 3CD
CD...$29.99 38.99
Great work from the second chapter of The Spencer Davis Group – the time immediately after Steve Winwood left to form Traffic, and the combo stepped forward into some even headier music of their own! This period of the SDG isn't nearly as well known as their early hits – and the box ... CD