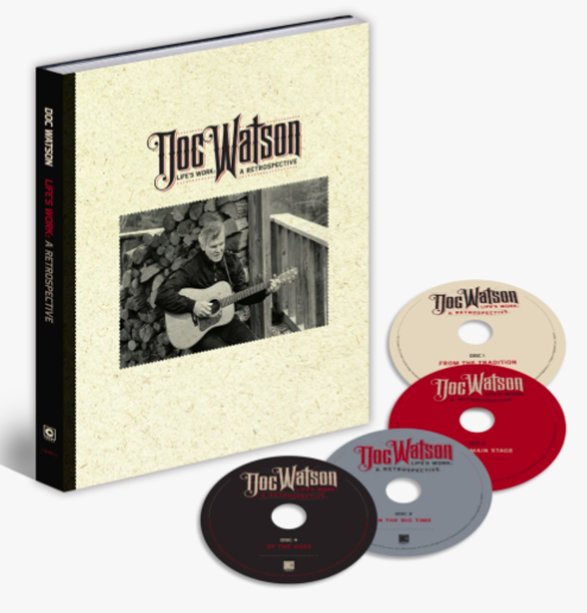 A career-spanning collection of work from the great Doc Watson, all collected together in a really beautiful book-styled package – one that offers up as much about Watson's unusual life as it does his legendary work on guitar! Watson's got an enigmatic history – in that during the 50s, he was headed towards a more mainstream life in country music, but veered back towards more traditional material as the decade moved in – abandoning his electric for an acoustic, and really seeing great fame in the 60s, as he was a discovery by a whole new generation of roots music fans – and became as important an acoustic guitar innovator as artists like John Fahey and Robbie Basho! Watson's always been a bit more down to earth than both of those players, though – and has a well-grounded approach to life that helped him stay strong and continue to evolve over the decades – as you'll hear in this huge set of 100 different songs from over the years. The package features a number of Doc's duets with son Merle Watson, plenty other solo recordings, and other material with Nitty Gritty Dirt Band, Flatt & Scruggs, and others. The package is very heavy on work from the key years of the 60s through the early 80s – and includes choice cuts from other years too – alongside an 88 page book that features new notes, and many rare photos and images!  © 1996-2022, Dusty Groove, Inc.

Looks Like Stormy Weather 1969 to 1975
Mega/Ace (UK), Late 60s/Early 70s. New Copy
CD...$16.99 22.99
Really fantastic work from the overlooked Sammi Smith – a country singer with a name that sounds a bit sweet, but a style that had her taking on some much hipper material than some of her contemporaries! In a way, Sammi's the kind of singer who was born in the generation of Bobbie Gentry and ... CD

Bear's Sonic Journals – Live At The Carousel Ballroom – April 24, 1968
BMG, 1968. New Copy
CD...$14.99 15.99
Rare live work from Johnny Cash – recorded right at the height of his late 60s fame on Columbia Records, but with a style that nicely takes his sound back to its roots! June Carter joins Cash at a few points in the performance – but most of the set jus has Johnny working with the ... CD

What Goes Around Comes Around/Music Man/Back On Black/Waylon & Company
RCA/BGO (UK), Late 70s/Early 80s. New Copy 2CD
CD...$16.99 22.99
Four full albums from Waylon Jennings – served up here in one double CD set! First up is What Goes Around Comes Around – Waylon Jennings' last album of the 70s, and a set that continues the superstar run he forged during the decade – delivered with that increasing power and focus ... CD

Latest Shade Of Blue – The Columbia Recordings 1973 to 1976 (4CD set)
Columbia/Bear Family (Germany), Mid 70s. New Copy 4CD
CD...$114.99 149.99
Incredible work from the great Connie Smith – her sometimes-overlooked material recorded in the mid 70s for Columbia Records – work that shows a completely different side of Connie's talents than her better-known sides for RCA! Here, Connie's a mature woman who's clearly lived a lot of ... CD