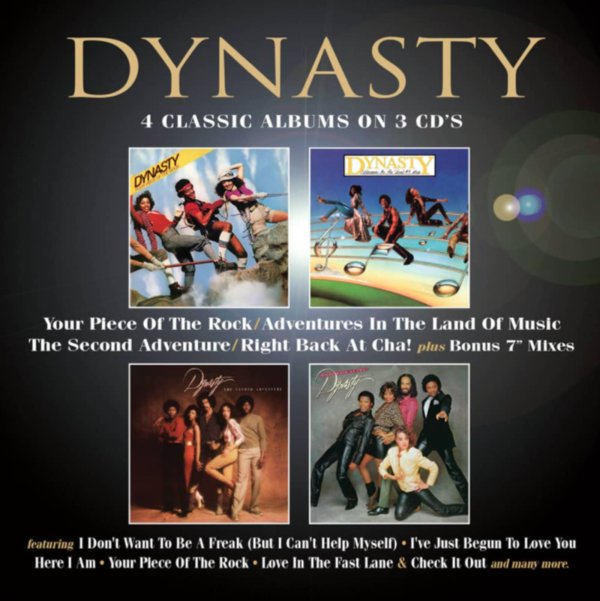 Four classic albums from Dynasty – served up here with bonus material too! First up is Your Piece Of The Rock – a set that has Dynasty working with snapping grooves with a nice sort of electro undercurrent –- all the handiwork of Leon Sylvers, who also plays bass and drums on the record – and really helps Dynasty find their groove! The tracks here are all quite long, and offer up plenty of space for the players to jam nicely – a group that includes Fred Jackson on saxophone, Gene Dozier on keyboards, and Oscar Brashear on trumpet. Dynasty are pretty good too – a bit more than just a club trio filling in vocals from time to time – and titles include "Satisfied", "Your Piece Of The Rock", "I Don't Want To Be A Freak", "When You Feel Like Giving Love", and "It's Still A Thrill". Next is Adventures In Music – almost a fusion of older sweet group soul with some of the more bottom-driven modes forged by the Solar label! The keyboards are upfront, the basslines strong, and the group is completely tight on the money – at a level that made them one of the strongest 80s proponents of the Solar Records groove. The title cut here is our favorite – a sweet stepper that bursts out with this blast of sound that's totally great – completely captivating, and filled with cascading sounds that really grab us. Other tracks include "Ice Breaker", "Something To Remember", "Day & Night", "Do Me Right", and "I've Just Begun To Love You". Next is Second Adventure – the kind of set that shows why the group went on to become one of the strongest things going in the second chapter of the Solar Records soul empire from LA! The album begins with a rock-solid punch, then continues strongly throughout – basslines, guitar riffs, and funky drums all right on the money – used in a way that's somehow fresher than most of the larger funk groups of the time – and with a nice balance between mellower moments that still seem to have a gentle kind of groove. The energy is wonderful throughout – and titles include "Give It Up For Love", "Love In The Fast Lane", "Revenge", "Here I Am", "A Man In Love", and "You're My Angel". Last up is Right Back At Cha – a set that's super tight and right on the money – that wonderfully catchy approach to 80s R&B that was the hallmark of Dynasty at their height! The tunes are a hook-heavy blend of funk and upbeat modes – all brightly glowing with that style that made Solar Records one of the leading lights of the Cali soul scene in the decade – and which gets some extra special treatment here from one of their most consistent groups! Titles include "That's The Way I Feel About You", "Check It Out, "The Only One", "Questions", "Straight Out", and "Does That Ring A Bell". 3CD set also features 9 bonus tracks – all 7" single mixes of hits from the albums!  © 1996-2022, Dusty Groove, Inc.