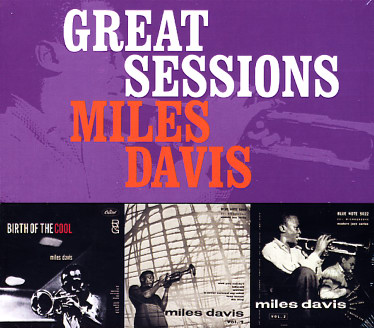 3 CD
Out Of Stock

Early Miles classics – packaged together in a nicely priced 3CD set! Birth Of The Cool is legendary work from Miles Davis – large group sessions that virtually define the "cool" in cool jazz! The work's quite different from Davis' earlier bop sides with Charlie Parker – and show a distinct influence from modernists like Gerry Mulligan (who is on the recordings) and from the experiments of the Tristano school. Miles is less the leader than the creative visionary – as all players come together in a perfect blend of sound, perfectly polished, and with a very dark edge. Titles include "Jeru", "Move", "Venus De Milo", "Budo", and "Deception". Miles Davis Vols 1 & 2 feature xcellent early hardbop work by Miles – recorded in 1952 and 1954, and some of his best early sides as a leader! The CDs feature remastered versions of the material, sparkling with the talents of Rudy Van Gelder – and the sessions feature JJ Johnson, Gil Coggins, Art Blakey, Kenny Clarke, Jackie McLean, and Oscar Pettiford. Titles include "Weirdo", "Woody N You", "Dear Old Stockholm", "Chance It", "Donna", "Yesterdays", "Kelo", "Enigma", "Ray's Idea", "CTA", and "The Leap" – and also include a fair number of alternate takes!  © 1996-2022, Dusty Groove, Inc.
(Out of print, slipcover has some light wear.)

Complete Live At The Plugged Nickel 1965 (8CD boxset)
Columbia/Legacy, 1965. Used 8 CDs
CD...$149.99
This stunning live set has been hailed by many as one of the finest moments of Miles' mid 60s career – music played with a frenetic energy that even blows away the famous studio sessions of the time! The group here is a landmark lineup – young modernists Wayne Shorter on tenor, Herbie ... CD

He & She
Blue Note, 2009. Used
CD...$4.99
One of the warmest records we've heard in years from Wynton Marsalis – a really unique little album that actually features bits of poetry spoken by Wynton in between the tracks! Before you cringe at the thought, give this one a chance – as the words were penned by Marsalis himself, and ... CD