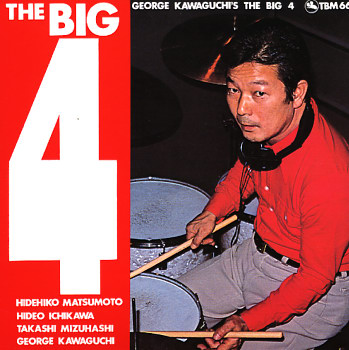 Japan's legendary drummer steps out here with a killer combo – definitely a "big 4", given that the group features excellent tenor work from Hidehiko "Sleepy" Matsumoto, plus Fender Rhodes and acoustic piano from Hideo Ichikawa! Kawaguchi's famous sense of swing really gets the whole thing going – that big, round approach to the drums that was somewhere in a space between Art Blakey and Buddy Rich – and which was definitely hitting some of its hipper tones by the time of this 70s set. The group also features Takashi Mizuhashi on bass – and titles include "Invader 7", "Albatross", "Monday Samba", and "Sleepy's Funk".  © 1996-2022, Dusty Groove, Inc.
(Part of the Three Blind Mice Supreme Collection!)