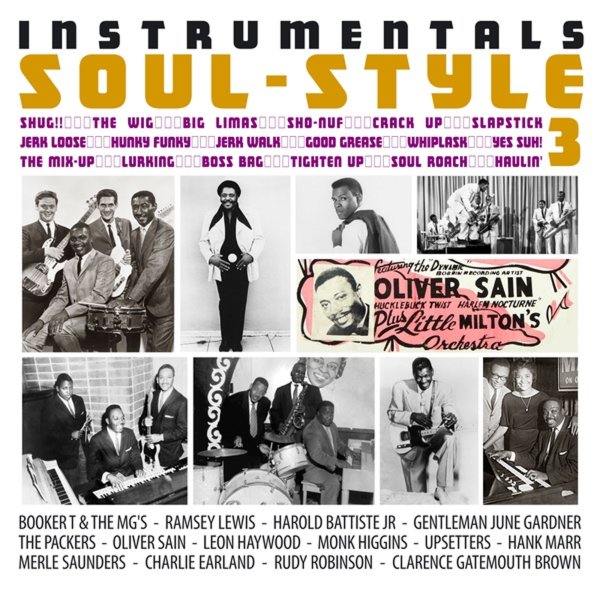 A heady serving of instrumental soul tunes from the center of the 60s – work that really takes off from jazz and R&B modes from a few years before, and serves up music that reminds us that great soul sounds don't always need some lyrics in the lead! There's a nicely gritty vibe on most of these numbers – these cuts are from a time when the funky 45 was really coming into its own – and the double-length collection features a massive 60 cuts in all, from a wide variety of labels – titles that include "Never Make Your Baby Cry" by Johnny Talbot, "Slapstick" by Dino & The Dell Tones, "Good Grease" by Mark III Trio, "Ain't That Hateful" by Monk Higgins, "The Mustang" by Rudy Robinson, "Soul Roach" by Merle Saunders, "Soul Sister" by Four Gents, "Call Me" by Eddie Bishop, "Big Limas" by Cobra Kings, "Marr's Groove" by Hank Marr, "Right On" by Joe S Maxey, "Boss Bag" by Sammie John, "Haulin" by Shy Guy Douglas – and lots lots more!  © 1996-2021, Dusty Groove, Inc.

Soul Chronology Live – The Sixties (4CD set)
History Of Soul, Early 60s. New Copy 4CD
CD...$28.99
A pretty unique take on the rich world of 60s soul – a set that brings together tracks that are all live recordings from the time – maybe no surprise, given that soul music was one of the first genres to really explore the use of concert-based recordings – thanks to early 60s ... CD

Soul Fire
Granadilla (Germany), 1968. New Copy
CD...$5.99 16.99
A great bit of blue-eyed soul from the German scene of the 60s – music by a group who have a sound that's like some of the best UK soul acts of the same period – definitely rooted in American modes, but also tinged with a bit of 60s mod as well! Vocals are all in English, and tunes are ... CD

Black Ruby
Zodiac/Everland (Austria), 1972. New Copy
CD...$7.99 18.98 (LP...$24.99)
A hell of a great record from Ruby Andrews – a Chicago soul singer who started out sweet, but comes on hard and heavy on this righteous classic from the start of the 70s! The record's got a badass vibe you never would have expected from Andrews a few years before – with tremendous ... CD