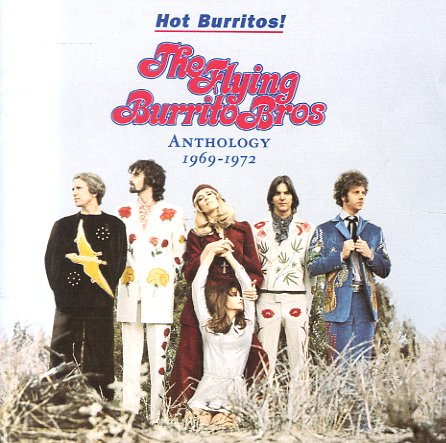 A set that's way more than just a "best of" sort of anthology – as the package features three full albums by the group, plus other material too! The set begins with the classic debut, Gilded Palace Of Sin – a true late 60s rock masterpiece – and like albums by Love and The Velvet Underground, a set that barely made a mainstream impact at the time – but which has gone on to be the stuff of influence and legend over the decades! The album's the first from Gram Parsons and the group – one of only two they would cut together – and the whole thing is a perfect blend of rough-edged rock and country influences rising up from the LA scene – all those glimmers of brilliance that Parsons had brought to the Byrds and other projects, maybe given their full flowering here in a mode that's unabashed about its country music influences – maybe even more so than some of Gram's later solo work. Sneeky Pete Kleinow's steel guitar really adds a lot – but so does the presence of Chris Hillman on guitar and mandolin, and Chris Ethridge on bass and piano. Titles include the brilliant "Sin City" – a track we'll love until we die – plus "Christine's Tune", "Do Right Woman", "Dark End Of The Street", "My Uncle", "Wheels", "Juanita", "Hot Burrito No 1", "Hot Burrito No 2", "Do You Know How It Feels", and "Hippy Boy". Burrito Deluxe is the second of only two albums recorded by Gram Parsons with the Flying Burrito Brothers – and a masterpiece that pushes the group's sound even farther than their debut! The set is filled with special moments – songs that show just why these guys were such a special bridge between late 60s country and rock music – and why all of the other groups they inspired just never came close to serving things up this well! Gram Parsons is fantastic on vocals, of course – but the whole group is great, especially Sneaky Pete on steel guitar. Titles include the fantastic romper "Man In The Fog", the very groovy "Lazy Days", the haunting "God's Own Singer", and the group's Jagger/Richards' approved take on "Wild Horses – plus other cuts that include "High Fashion Queen", "Image Of Me", "Older Guys", and "If You Gotta Go". Flying Burrito Brothers is The Burritos first LP, post-Parsons – and a pretty strong statement for the merits of the now unquestioned leader, Rick Roberts, and multi-instrumentalist new guy Bernie Leadon, who would later turn to the dark side and join the Eagles! Roberts penned or co-penned seven of the album's ten tunes, including "Colorado", "Hand To Mouth", "Just Can't Be", and "Four Days Of Rain". His contributions are for the most part nicely fragile, with just the right doses of sweetness and sadness. The group also covers Merle Haggard's "White Line Fever", Gene Clark's "Tried So Hard", and Dylan's "To Ramona". This is one of the band's rarer LPs, probably because of the absence of hipster hero Gram Parsons – truly a worthy piece of work! CD also features some other tracks recorded by Parsons with the group – including "Six Days On The Road", "Break My Mind", "Sing Me Back Home", and "Close Up The Honky Tonks" – and live tracks "Ain't That A Lot Of Love" and "Losing Game" – plus Gene Clark singing on "Here Tonight".  © 1996-2023, Dusty Groove, Inc.