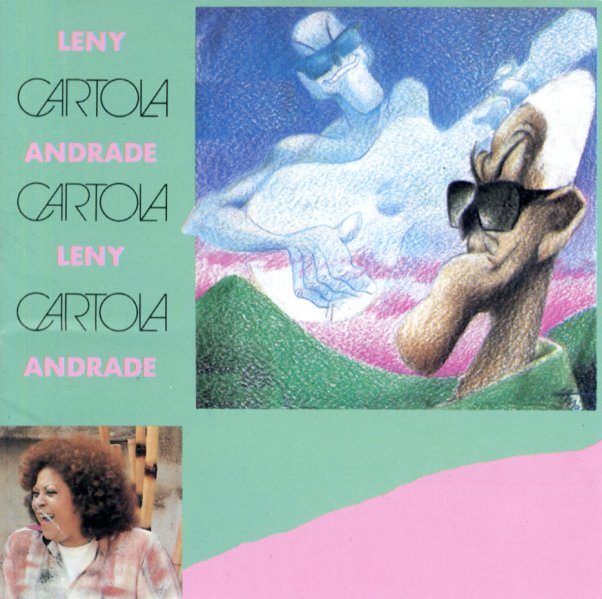 A tribute to older samba maestro Cartola, recorded in honor of his 80s birthday, and featuring jazzy interpretations of his tunes by Leny Andrade! Cartola's not on the album at all – except in spirit – and the overall sound is quite different than his own recordings, with small combo jazzy backing from arranger Gilson Peranzzetta. Titles include "Acontece", "Festa Da Vinda", "Sim", "As Rosas Nao Falam", "Vai Amigo", "O Mundo E Um Moinho", "Alvorada", "Amar A Ninguem", and "Amor Proibido".  © 1996-2022, Dusty Groove, Inc.
(Out of print.)

Leny Andrade (1985)
CID (Brazil), 1985. Used
CD...$19.99
One of 2 albums that Leny recorded for the Pointer label in the mid 80s – both with a similar lineup, similar style, and covers that are almost exactly the same – not that that's a bad thing, because the music is equally great on both, even if it's hard to tell them apart from the ... CD

Bossas Novas
Albatroz (Brazil), 1998. Used
CD...$7.99
Warm, jazzy, and with plenty of the bossa nova promised in the title – a record that's not to be confused with Leny's singular Bossa Nova album from a few years before, because this is a pluralized set from the late 90s! Roberto Menescal's on board to direct the music – and gives the ... CD

Eu Quero Ver
Eldorado (Brazil), Late 80s. Used
CD...$6.99
One of Leny Andrade's later albums – a mixture of jazz and bossa, with a sparkling modern edge, but still performed with small combo backing! There's electric keyboards on most of the cuts, dancing along with Leny's vocals in a breezy mode that's a bit like 80s work by Tania Maria on Concord ... CD

Luz Neon
Timeless (Holland), Late 80s. Used
CD...$9.99 11.99
A laidback little bossa session from Leny Andrade – recorded with that great mellow fusion sound she was using during the late 80s – a style that gave a nice shimmer to her recordings, but never really got in the way of her powerful vocals! The album features a core jazz group, ... CD

O Melhor De Rosa Passos
Universal/Velas (Brazil), 1997. Used
CD...$24.99 29.99
A beautiful little set of modern Brazilian vocal jazz tracks, pulled from the rich recording history of one of Brazil's better recent voices. Rosa's got a style that reminds us of Elis Regina's classic work, especially that from the late 60s with Roberto Menescal – but the overall sound of ... CD

Brazil Blue
EMI/Hemisphere, 1993. Used
CD...$4.99
Not to be confused with the Blue Brazil compilation on Blue Note – although quite similar to it – this is a similar batch of tracks that features lost Brazilian gems pulled from the catalog of the EMI/Odeon label, home to some of Brazil's best music of the 60's and 70's. The CD's got ... CD