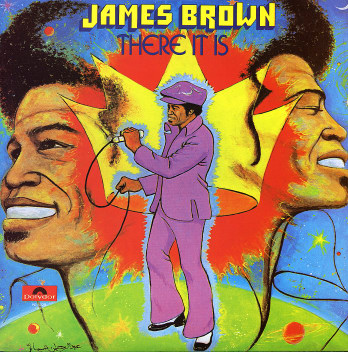 Raw power and righteous energy from James Brown – a set that still has all the best funk elements of his longer-form albums of the time, but which also packs an even stronger political message too! The vibe of the record is clear from the image on the cover – the most powerful since Payback – and James is even more focused in the lyrics, which bite harder than some of his other commentary of the period – while still allowing the JBs plenty of room to serve up some heavy funk in the process! Titles include the classics "Public Enemy #1" and "King Heroin", both hard soul political tracks – and the funkier side of The Godfather is represented by the killer cuts "Talkin Loud & Sayin Nothing" and James own version of "I Need Help" (which was also recorded by Bobby Byrd). The album also includes a great duet with Vicki Anderson on "Who Am I", the excellent title cut "There It Is", and a surprisingly nice version of "Never Can Say Goodbye" – as well as the single "I'm A Greedy Man".  © 1996-2021, Dusty Groove, Inc.

Have You Heard This Story
Island/Music On Vinyl (Netherlands), 1974. New Copy
CD...$12.99 13.99 (LP...$24.99)
Swamp Dogg on Island Records – still recording in the early 70s, but already part of the surprisingly long legacy for the alter ego of southern soul giant Jerry Williams! Williams works here with a great core band that features guitar from Travis Wammack – in a style that's a bit funky ... CD