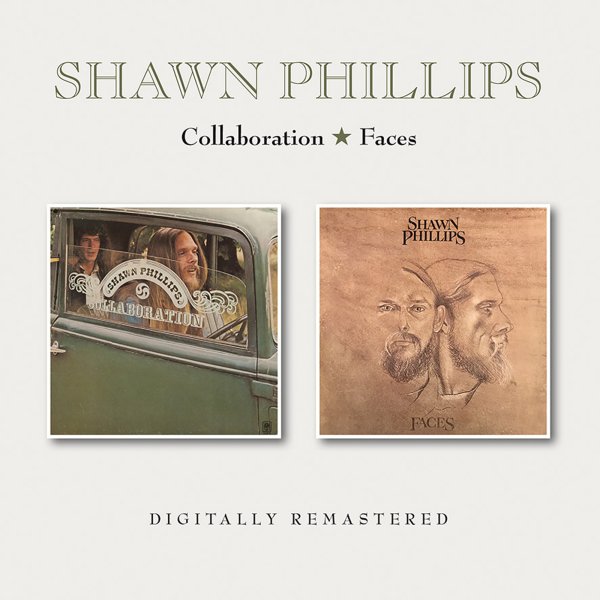 Two early albums from the great Shawn Phillips – back to back in a single set! First up is Collaboration – beautiful early work from Shawn Phillips – a British singer from that moment when the folk scene was really taking off into all sorts of new currents – but which are handled here by Shawn in ways that are very different than most of his contemporaries! The "collaboration" in the title refers to the work of Paul Buckmaster – who plays cello throughout the record, and also handles these great large arrangements on a few tracks – and Peter Robinson, who plays piano and bass – working with the other two musicians in this spare trio approach on most numbers, which really opens up the moody quality of Phillips' lyrics. The record is very different than, say, some of the other acoustic work coming out on Island Records at the time – and titles include "Us We Are", "Burning Fingers", "For Her", "Armed", "Spaceman", "Times Of A Madman Trials Of A Thief", "Springwind", and "8500 Years". Faces is a set that's billed as "an anthology of music from 1969" – and which captures the songwriting skills of Shawn Phillips at their early best! Right from the start, Shawn was very much his own sort of artist – able to work with modes that go way past any standard folksy sounds you might expect from a guy with an acoustic guitar – thanks in part to his use of an LA setting for some of the recordings on the record, which include help from Joe Sample on piano, and Sneaky Pete Kleinow on steel guitar! Shawn's got a bit of a rootsy vibe on those cuts, and there's a few other titles recorded a bit earlier, in the UK, which feel a bit more like the material on his Collaborations album – a nice blend, on titles that include "Chorale", "I Took A Walk", "Anello", "We", "Parisian Plight II", and "Hey Miss Lonely".  © 1996-2022, Dusty Groove, Inc.