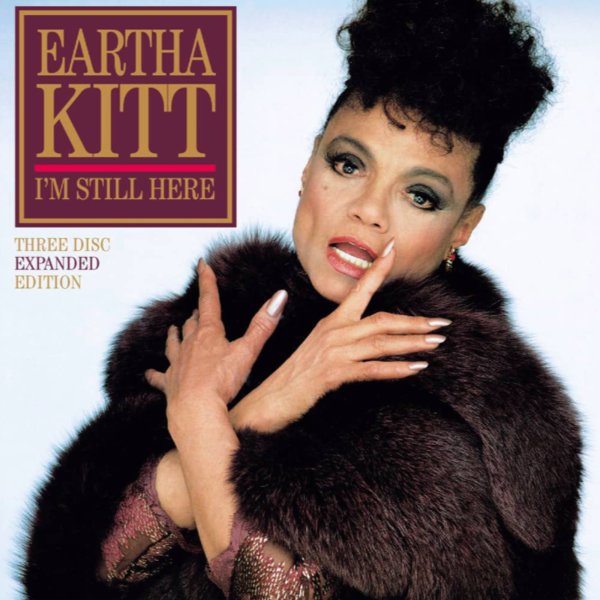 Eartha Kit at the end of the 80s – still going strong here on two albums that were only issued in the UK at the time! I'm Still Here is a set that really continues the love that the contemporary dancefloor scene had been showing Eartha Kitt during the 80s – a fantastic match of her trademark vocal style, which only seems to get more distinct with age – and some of the fresher clubby modes that were showing up in the world of overseas club! Bronski Beat join Eartha on one track – and lots of the record echoes the sort of groove that group was hitting at the time – on titles that include a great version of the Stephen Sondheim tune "I'm Still Here", done as one of the few non-dance tracks – plus "Do Or Die", "Primitive Man", "My Discarded Men", "Urban Fantasy", and "Hit Them Where It Hurts". Next is a double-live album recorded in London – a city where Kitt's career found a lot more welcome over the decades than on our side of the Atlantic – as Eartha showcases a career-spanning set of tracks, including "An Englishman Needs Time", "Here's To Life", "Just An Old Fashioned Girl", "I Want To Be Evil", "Hymn To Love", "The Day That The Circus Left Town", "My Discarded Men", "Where Is My Man", "Ne Me Quitte Pas", "C'Est Si Bon", "The Blues", and "Guess Who I Saw Today". 3CD set features a big booklet of notes – and bonus tracks that include "Primitive Man (ext)", "Cha Cha Heels (ext)", "Urban Fantasy (7" mix)", "Cha Cha Heels (radio mix)", and "Primitive Man (7" mix)".  © 1996-2021, Dusty Groove, Inc.