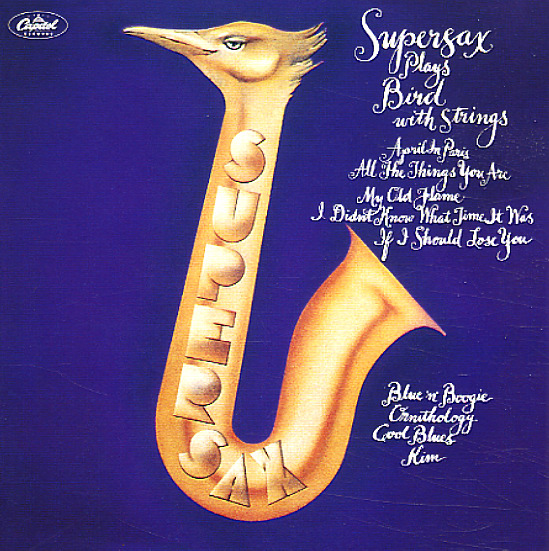 The Supersax ensemble takes on the classic concept of Charlie Parker with strings – really sticking true to the groundbreaking spirit of the original experiments, while also bringing things forward a bit with their wonderful multi-horn approach! The group features lead alto from Med Flory, plus tenor from Warne Marsh and Jay Migliori, additional alto from Joe Lopes, trumpet from Conte Candoli, and trombone from Frank Rosolino – the latter two of whom really get in some nice solos of their own! Strings are well-scored – with the kind of subtle swing of the old days, and an occasional solo from Bobby Bruce on violin – and titles include "April In Paris", "All The Things You Are", "Cool Blues", "Kim", "Ornithology", "If I Should Lose You", and "Sign Off".  © 1996-2022, Dusty Groove, Inc.

Plays Bird
Capitol/Universal (Japan), 1973. New Copy
CD...$13.99
A completely fresh take on the Charlie Parker aesthetic of the bop generation – updated for the 70s, but in ways that are still pretty classic overall! The group's a large one, but plays with a tightness that goes way past their gimmicky name – thanks to players who include Med Flory ... CD