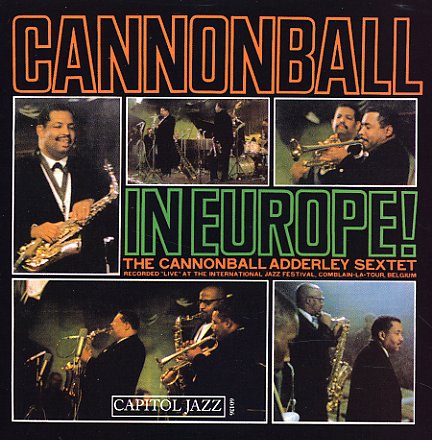 Also available
Cannonball Adderley — Cannonball In Europe ... CD 7.99
Rare concert work by Cannonball Adderley – recorded live in Europe in the early 60s, only ever issued there until a much later release in the US, but every bit as essential as any of the Adderley live combo albums from the early 60s – including their classics at the Lighthouse and in San Francisco! The group here is every bit as wonderful as the combos on those sets – a young Yusef Lateef on reeds, really hitting his stride in the mix of soulful and exotic grooves in the set – working with Nat Adderley on cornet, Joe Zawinul on piano, Sam Jones on bass, and Louis Hayes on drums. The tunes are a good mix of modal numbers and more straightforward hardbop – and titles include "P Bouk", "Gemini", "Work Song", "Trouble In Mind", and "Dizzy's Business".  © 1996-2022, Dusty Groove, Inc.