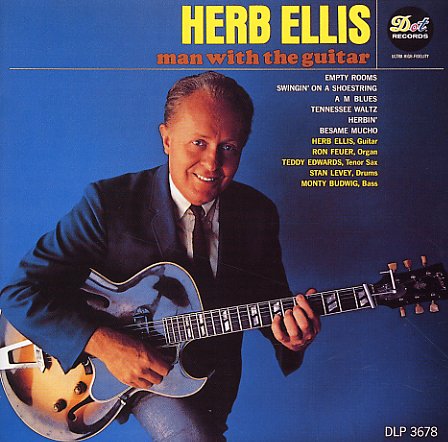 Man With The Guitar

One of the grooviest Herb Ellis albums we've ever heard – an obscure 60s session for Dot Records, recorded with a mix of guitar and organ, in a style that's a bit like that of Howard Roberts at the time! Herb's working here in a surprisingly bluesy mode – playing in a combo with Teddy Edwards on tenor, Monty Budwig on bass, Stan Levey on drums, and the lesser-known Ron Feuer on organ. Feuer's got a lean, clean sound that's totally great – like the organ work on some of the Capitol soul jazz sides of the time, but in a more relaxed mode – in keeping with the nature of the set. The tunes are all in the 5 minute range, and have a rhythmic quality that's a real change from some of Ellis' other work – a bit mod and groovy at times you wouldn't expect! Titles include "Empty Rooms", "Swingin On A Shoestring", "AM Blues", and "Herbin".  © 1996-2022, Dusty Groove, Inc.

Jazz Advance
Transition/Universal (Japan), 1956. New Copy
CD...$13.99
One of the best pre-1960 sessions by Cecil Taylor, recorded in Boston in 1956, and originally issued on the totally rare Transition label in a very small pressing! Taylor's playing here with the great bassist Buell Neidlinger, one of his prime compatriots in the early days, plus the great drummer ... CD