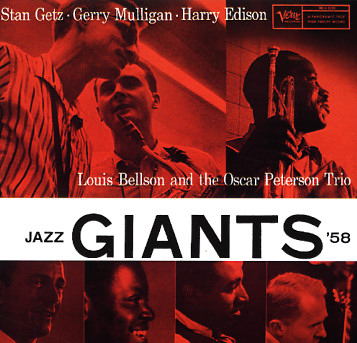 An all-star session put together by Verve in 1958 – one that features a septet of some of the label's biggest giants in jazz at the time! The format here is a bit open-ended – almost like some of the earlier JATP sessions on Verve – with lots of room for personal interaction between the soloists, especially the horn players in the lead! These include Stan Getz on tenor, Gerry Mulligan on baritone sax, and Harry Edison on trumpet – working alongside Oscar Peterson on piano, Herb Ellis on guitar, Ray Brown on bass, and Louis Bellson on drums. Titles include a beautiful extended "Ballad Medley" – really a great illustration of the freedoms that Verve brought to jazz recording in the 50s – plus the titles"Chocolate Sundae", "When Your Lover Has Gone", and "Candy".  © 1996-2022, Dusty Groove, Inc.