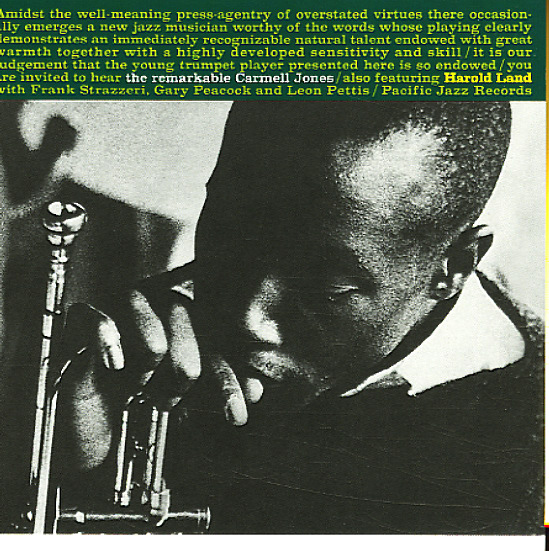 Remarkable Carmell Jones, indeed – and one of the few albums ever cut as a leader by this up-and-coming force on the LA scene at the start of the 60s! Jones was a player who really showcased something new on the west at the time – a move away from cool jazz, and the start of a deeper, headier generation of musicians – the bold power that would come from cats like Lou Blackburn, Horace Tapscott, and Jimmy Woods. This date's an early entry into that legacy – and has a tight approach to hardbop with plenty of modern elements – a bit like the shift that Curtis Amy was making at the time. In addition to Jones on trumpet, the album also features Harold Land on tenor, Frank Strazzeri on piano, Gary Peacock on bass, and Leon Pettis on drums – all working with a careful blend of soul jazz and modern influences, on a wonderful batch of well-written tunes. Titles include "I'm Gonna Go Fishing", "Night Tide", "Sad March", and "Stellisa".  © 1996-2022, Dusty Groove, Inc.