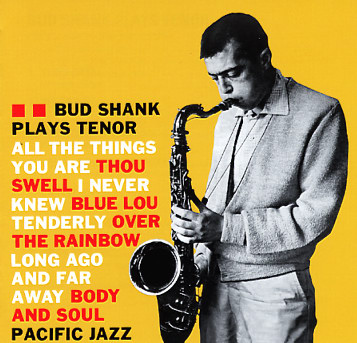 Back in the 50s, LA reedman Bud Shank was maybe best known for his work on alto sax, and occasionally flute – but this standout album for Pacific Jazz shows that Bud could be equally great on tenor – a quality he'd take up more in later years, as he disappeared into studio work away from the jazz limelight. Yet here, Bud's a completely essential player on the scene – opening up beautifully with a well-crafted tone on tenor – working in a quartet setting that gives him plenty of space in the lead – with Claude Williamson on piano, Don Prell on bass, and Chuck Flores on drums. Bud's sound on the tenor isn't vastly different than his alto work, but it is handled here with some gutsier touches than usual – and almost a bit more soul in the undercurrent too. Titles include "Blue Lou", "All The Things You Are", "I Never Knew", and "Long Ago & Far Away".  © 1996-2022, Dusty Groove, Inc.

Michelle
World Pacific (Japan), 1965. New Copy
CD...$9.99
Bud Shank takes on the sounds of The Beatles – and a whole host of other 60s pop stars as well – all with results that are as jazzy as they are groovy! The album's one of a few that Bud cut for Liberty in this format – alto and flute spread out over fuller backings from Bob ... CD