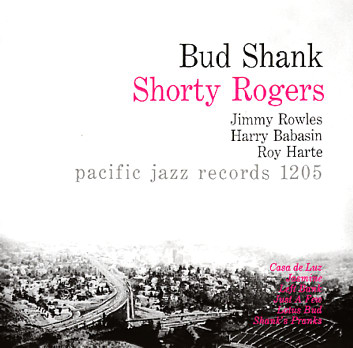 A west coast classic – featuring some of Bud Shank's best small group work of the mid 50s! The album has Shank playing in two different groups, one with Shorty Rogers on trumpet, one with the great Bill Perkins on tenor – and we'll be honest in saying that Perkins' tone is incredible, a perfect match for Shank's well-honed sound of the time – blown with a nice edge that really deepens the sound of the record – a slight sense of soul that goes past traditional west coast modes, and really fits Shank's sometimes-edgey playing. Rogers is still pretty great too – and the casual setting of the album is a refreshing change from some of his more over-arranged work for other labels at the time! Titles include "Casa De Luz", "Jasmine", "Left Bank", "Paradise", "Fluted Columns", and "Royal Garden Blues".  © 1996-2022, Dusty Groove, Inc.

Michelle
World Pacific (Japan), 1965. New Copy
CD...$9.99
Bud Shank takes on the sounds of The Beatles – and a whole host of other 60s pop stars as well – all with results that are as jazzy as they are groovy! The album's one of a few that Bud cut for Liberty in this format – alto and flute spread out over fuller backings from Bob ... CD