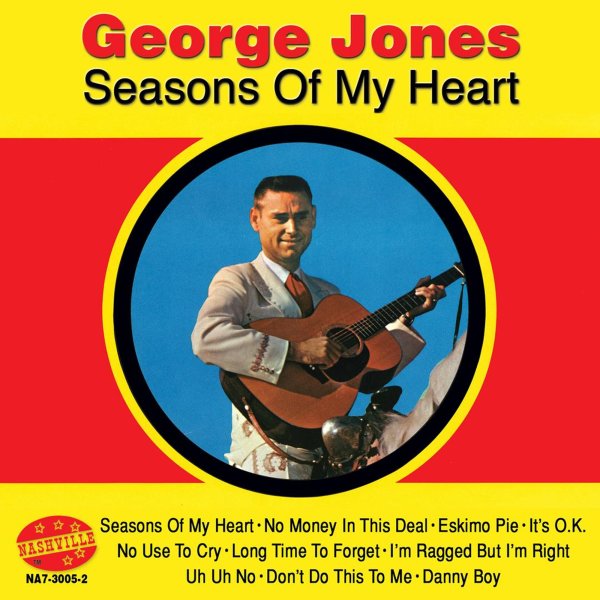 Seasons Of My Heart

Overlooked early work from the great George Jones – done during that very fertile time of recording, when he was moving between releases on the Starday and Mercury labels, both of whom left a fair bit of material in the can! Jones isn't the heartbreaking balladeer of his later, boozier years – and here he moves between a great range of material that includes some upbeat rockers that have George almost crossing into rockabilly modes, with a really youthful sort of zest, and plenty of great basslines pumping things up at the bottom! Titles include "It's OK", "Eskimo Pie", "Uh Uh No", "I'm Ragged But I'm Right", "Don't Do This To Me", "No Money In This Deal", "Seasons Of My Heart", and "Long Time To Forget".  © 1996-2021, Dusty Groove, Inc.

Still The Same Old Me/First Time Live/One Woman Man/Friends In High Places
Epic/BGO (UK), 1980s/Early 90s. New Copy 2CD
CD...$9.99
Four later albums from the great George Jones – packed together in a 2CD set! First up is Still The Same Ole Me – and on the set, George Jones is still definitely the same old me – even if his voice has aged and changed over the years! The album's got some great songs that ... CD

Truck Drivin Son Of A Gun
Starday/Nashville, 1960s. New Copy
CD...$2.99 9.98
Nobody put together a truck driving country record better than the Starday/Nashville label in the 60s – and this sweet little set is a perfect tribute to their talents! The set's full of cool, groovy, truck-themed tunes from the indie underground of the time – not the polished pop work ... CD