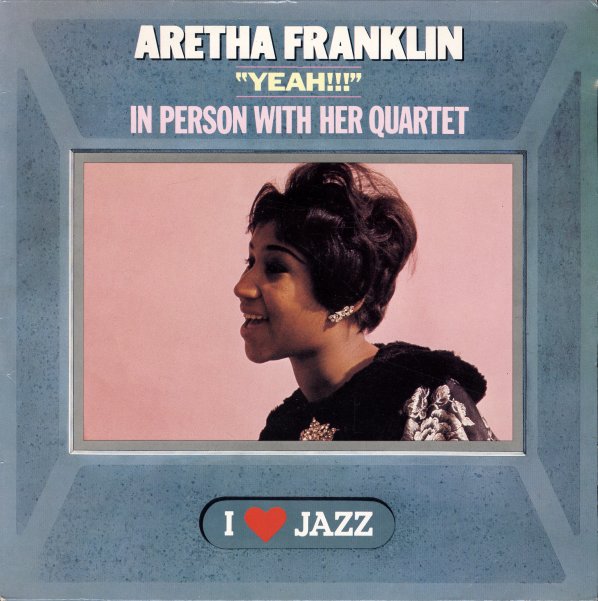 Yeah – In Person With Her Quartet (Dutch pressing)

A hip little live date from Aretha Franklin – one that's got a very jazzy feel, and some great small combo backings! The album's almost a distillation of the jazzy styles on Aretha's first albums for Columbia – taken into even leaner territory here, in ways that really set Franklin loose on vocals – making for some of her most forceful moments on record at the time. The quartet features pianist Teddy Harris, who steps back on a few tunes to let Franklin take over the piano – and titles include "Once In A Lifetime", "Love For Sale", "Impossible", "Today I Love Everybody", and "Without The One You Love".  © 1996-2022, Dusty Groove, Inc.
(80s Dutch pressing.)

La Diva
Atlantic, 1979. Near Mint-
LP...$13.99
A late 70s gem from Aretha Franklin – and although a bit overlooked, a record that still shows many of the best sides of Aretha's talents for Atlantic in the decade! The main arrangements here are done by Van McCoy – and while they show a bit of a dancefloor spin, they're not as overly ... LP, Vinyl record album

Broadway's Closer To Sunset Blvd.
CBS, 1984. Sealed
LP...$6.99
The first breakaway effort from the trio of Ernie Isley, Chris Jasper, and Marvin Isley – a set that's got an even leaner groove than some of the Isley Brothers material from years before! The group really hit their stride right away – stepping out in a sweet array of funky rhythms ... LP, Vinyl record album

Caravan Of Love
CBS, 1985. Very Good+
LP...$4.99
A huge 80s moment for the Isley Brothers empire – a set that has Ernie and Marvin Isley stepping away from the main group with Chris Jasper – to reinvent their sound for the 80s! The record still has all the slinky soul and upbeat funk of the Isley material from the late 70s – ... LP, Vinyl record album

Ebonys
CBS/Philadelphia International, 1973. Very Good
LP...$9.99
Excellent work by this oft-overlooked east coast harmony group! Like a rare few groups at the time, The Ebonys had a sound that mixed male and female harmonies – in a sweetly mellow sound that was a lot hipper than more famous groups that used the style, and which had all the best elements ... LP, Vinyl record album