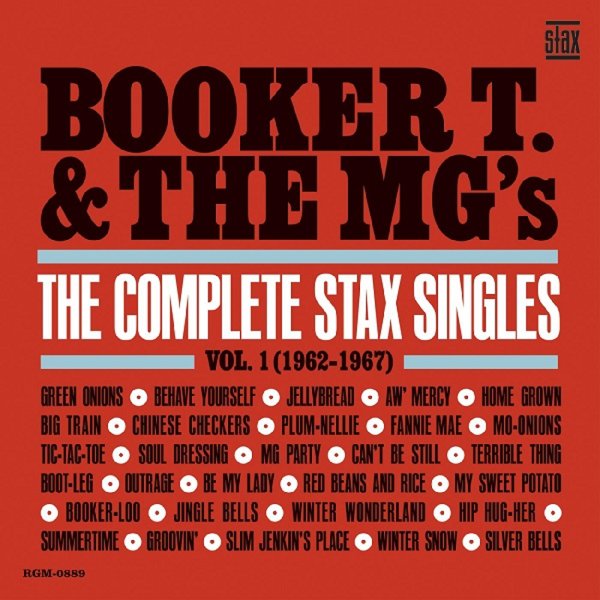 Also available
Booker T & The MGs — Complete Stax Singles Vol 1 – 1962 to 1967 ... CD 11.99
A treasure trove of tight, organ-driven grooves from Booker T & The MGs – a quartet who really helped transform the sound of soul music in the 60s – even if they never sang on any of their records! The combo instrumental record had existed before Booker and the group, but working at Stax Records during the glory days of the Memphis soul scene, The MGs were able to come up with a whole new approach – tight, focused, and very sharp – not entirely funky, but not far off either – usually just with a scratchy guitar line to tighten up the rhythm, and Booker's fantastic lines on the organ to set up the tune! The group recorded a number of classic albums for Stax, but they maybe shone most on their singles – especially the b-sides, which were where they really had fun. (And trivia – "Green Onions", their biggest hit, was originally a b-side!) The set features the first run of their Stax singles – 29 tracks in all, with lots of unusual instrumentals next to the hits – titles that include "My Sweet Potato", "Booker Loo", "Aw Mercy", "Home Grown", "Big Train", "Chinese Checkers", "MG Party", "Soul Dressing", "Tic Tac Toe", "Mo Onions", "Behave Yourself", "Slim Jenkins Place", "Winter Wonderland", "Hip Hug Her", "Red Beans & Rice", "Can't Be Still", "Terrible Thing", "Outrage", "Boot Leg", "Fannie Mae", "Summertime", "Winter Snow", and of course, "Green Onions".  © 1996-2022, Dusty Groove, Inc.
(On red vinyl!)

Shaft (purple vinyl pressing)
Enterprise/Stax, 1971. New Copy 2LP Gatefold (reissue)
LP...$22.99 29.98 (LP...$13.99, CD...$2.99)
A landmark album that hardly needs any introduction – as it's one of the most famous soundtracks, if not soul records, of the 70s! Isaac Hayes had already surprised music fans with the sophistication of his first few solo albums, which had been issued before this one – but with Shaft, ... LP, Vinyl record album