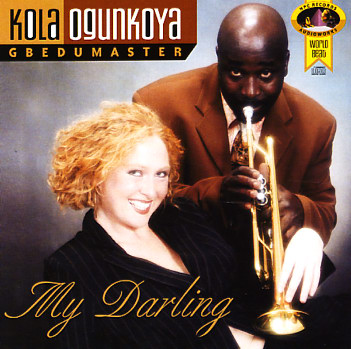 Contemporary Afro Funk from Kola Ogunkoya – a trumpeter who worked with Fela back in the day, and who's managed to carry on the Ethiopian groove over here in the US! The cover of the CD's a bit cheesy, but the music is pretty darn great – and Kola's group are a DC-based ensemble who can hit hard when they want to, but can also lay back for a mellower, more lyrical style as well. The groove here is a bit more farther reaching than just a simple copycat of 70s Afro Funk modes – and although a few tunes show a definite Fela link, there's others which go for a more varied groove – bits of contemporary African modes flowing in alongside the rhythms. Titles include "My Darling", "Sweetie Baby", "Boju Boju Oloro N Bo", "Salute To Parents", "Afro Jazz", and "Afro Pop".  © 1996-2021, Dusty Groove, Inc.
(Out of print.)