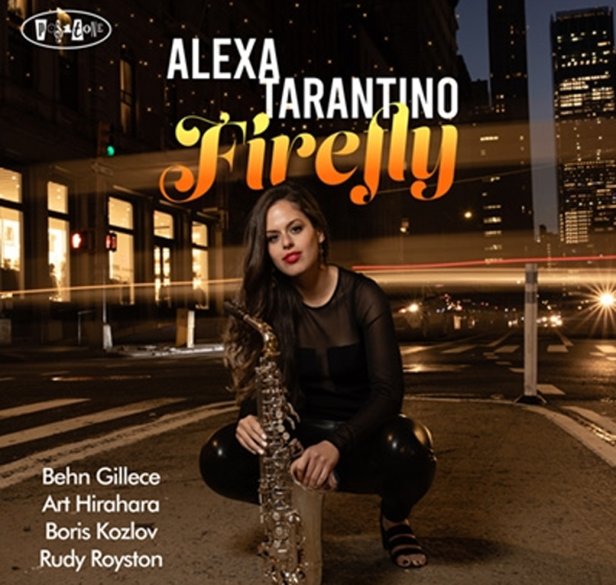 Also available
Alexa Tarantino — Firefly ... CD 11.99
Saxophonist Alexa Tarantino just seems to get better and better with each new record – stretching out here on a range of horns that includes alto and soprano sax, plus flutes and clarinet as well – and set up in a wonderful quintet that features the vibes of Behn Gillece, piano and Rhodes of Art Hirihara, bass of Boris Kozlov, and drums of Rudy Royston! If you know contemporary jazz and/or the Posi-Tone label, you'll know how great all these elements are individually – and together, they're even better than you might expect – as Tarantino leads the group through a strong set that mostly features original numbers, plus two Wayne Shorter remakes – very fitting, as there's an early Shorter spirit to the way some of these tunes unfold and flow. Titles include "Spider's Dance", "Mindful Moments", "Surge Capacity", "Firefly Code", "Lady Day", "Rootless Ruthlessness", and "Daybreak".  © 1996-2022, Dusty Groove, Inc.
(Still sealed.)

Celebration
Posi tone, 2003. Used
CD...$11.99
A freewheeling trio set from reedman Sam Rivers – the kind of hard-burning, open-ended record he does so well! Rivers' energy here is amazing – a fire that hasn't dimmed since the start of the 70s, when he first started letting loose like this – and throughout the course of the ... CD

No Arrival
Posi tone, 2018. Used
CD...$9.99 11.99
Trombonist Nick Finzer's got a round, warm sound throughout – a well-blown approach to his instrument that comes on with all the rich colors of a classic player like Curtis Fuller or JJ Johnson! Yet there's also a freshness to the record, too – partly because Nick wrote about half the ... CD

Apples & Oranges
Posi tone, 2020. Used
CD...$4.99 11.99
Forget the cover, which is maybe a bit too sweet for our taste – and instead imagine some sort of vintage Prestige Records soul jazz image on the front – because the set's a tremendous batch of tenor and organ numbers throughout! Tenorist Doug Webb has recorded with Hammond organ ... CD