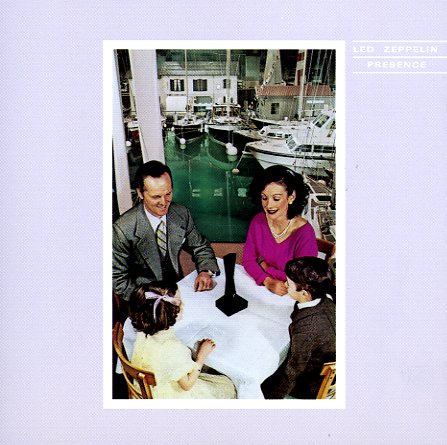 Overlooked genius from Led Zeppelin – an album that was missed by many the first time around, because of it's tight focus and simplicity! For the set, the group step back just a bit from their more stylistically sprawling tendencies – almost as if they got some of the more ambitious ideas out of their system with Physical Graffiti, or simply wanted to get out there and kick some ass – a back to basics move, and one that sees some tremendous guitar work from Jimmy Page! The album still has some longer songs and complicated changes – this is Led Zeppelin, after all – and the lack of over-played classic rock radio fodder actually makes this one a better listen nowadays than the more iconic albums. Includes "Achilles Last Stand", "For Your Life", "Nobody's Fault But Mine", "Candy Store Rock", "Hots On For Nowhere", and "Tea For One".  © 1996-2021, Dusty Groove, Inc.
(Out of print, includes obi. Appears to be taken from the Definitive Collection box set.)

Fragile (Definitive Edition)(CD/Blu-ray)
Atlantic/Panegyric, 1972. Used CD & Blu-ray
CD...$28.99 (LP...$13.99)
Classic! Fragile is the one that catapulted Yes to unlikely stardom, and in so doing, it brought adventurous, proggy rock to mainstream audience – pretty much changing the face of rock for at least a decade to come! Rick Wakeman's arrival and his spacier electronic keyboards have a lot to do ... CD