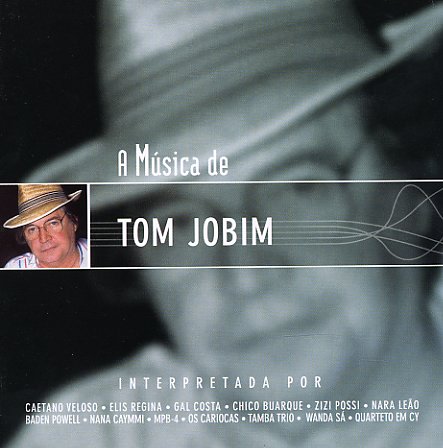 A nice batch of spirited visions of the work of the great Tom Jobim from throughout the years – by a top shelf line up of compatriots, contemporaries, and offspring including Caetano Veloso, Gal Costa, Os Cariocas, Zizi Possi, Nara Leao, Tambo Trio and others! There are 14 tracks in the set, ranging from Os Cariocas take on "Samba Do Aviao" from 1963 all the way up to Quarteto Em Cy's "Falando De Amor" from 1997. A great little cross section of artists and material that shows the wide-reaching grasp of Jobim's huge influence. Other tracks include "Dindi/Eu Sei Que Vou Te Amar" by Caetano, "Aguas De Marco", "Desafinado" by Gal Costa, "Luiza" by Zizi Possi, "Corvovado" by Nara Leao, Vivo Sonhando" by Wanda Sa and lots more!  © 1996-2021, Dusty Groove, Inc.
(Out of print.)