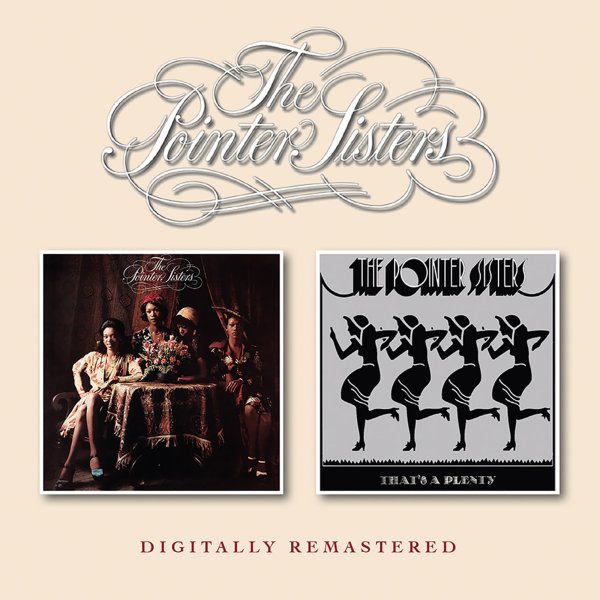 Two early albums from this legendary group – back to back in a single set! First up is the self-titled Pointer Sisters – the group's debut, and an album that's a lot deeper than most of their crossover pop from years to come! At the time of the album's release, the trio were a badass group of female singers on the Bay Area scene – out to redefine the role of the girl group in soul – working not only with righteous power that was a real change from modes of the 60s – but also this trans-temporal quality that had them reaching back with ease for references from decades past, which also includes a surprising amount of jazz! The highlight here is the group's classic funky break version of Allen Toussaint's "Yes We Can Can" – and other titles include "Naked Food", "Wang Dang Doodle", "Sugar", "Pains & Tears", "Jada", "River Boulevard", and "Cloudburst". That's A Plenty is a wonderfully retro-styled set from the Pointer Sisters – one that has the group singing in a variety of older jazz modes, but which also mixes in a nice dose of heavy funk as well! The format's an odd one, but very typical of the group's genre-blending style – of the sort that first got them noticed strongly in the early 70s, then helped them bridge out to a wide variety of audiences later in the decade. Styles include bop, swing, and even a bit of trad jazz – plus some bluesier funk on the best numbers – and the album features an incredible 8 minute version of "Love In Them There Hills", done in a sweet 70s electric style! Other tracks include "Grinning In Your Face", "Little Pony", "Fairytale", "Black Coffee", "Shaky Flat Blues", and "That's A Plenty/Surfeit USA".  © 1996-2023, Dusty Groove, Inc.

Raise! (with bonus tracks)
Columbia/Iconoclassic, 1981. New Copy
CD...$11.99 13.98
Earth Wind & Fire hits the 80s – and never misses a beat! Turns out that the group's older style of jazzy funk was a perfect fit for the boogie-styled rhythms of the post-disco era – heard here on the megahit "Let's Groove", and followed up by a beautiful batch of ... CD