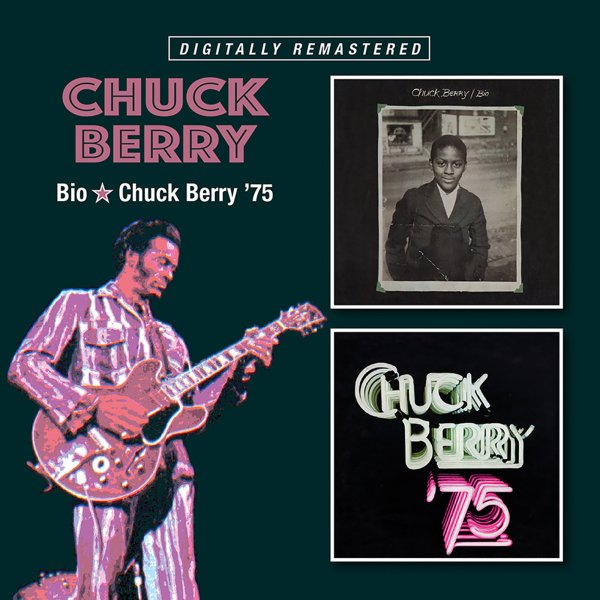 A pair of 70s albums from the great Chuck Berry – back to back on a single CD! First up is Bio – an overlooked early 70s set from the legendary Chuck Berry – one that has him in a really great setting that shows just how much Chuck continued to grow over the years! Sure, plenty of folks would have been content to live off their early hits – especially if those hits were as great as Berry's – but Chuck seems to be an even better guitarist here than usual, and hits all these great bluesy currents in the company of a small combo that features members of the group Elephant's Memory, who provide Berry with backing on most of the tracks. Things are nice and lean down – more blues than soul or funk – and titles include "Aimlessly Driftin", "Bio", "Woodpecker", "Rain Eyes", and "Talkin Bout My Baby". The Chuck Berry 75 set is nicely earthy work from Chuck Berry – one of those records that represented part of the continuing evolution of the guitar genius from his early years – which here seems to have Chuck maybe picking up a bit of a swamp rock vibe at times! The set was recorded in New York, but there's some southern currents in the rhythms too – and Berry even plays a bit of piano at times, with a heavy hand that seems to draw a lot from the Louisiana scene. Ingrid Berry Gibson joins Berry on vocals on a few cuts – and titles include "I'm Just A Name", "My Babe", "A Deuce", "Too Late", "South Of The Border", "Sue Answer", "Baby What You Want Me To Do", and "I'm Just A Name".  © 1996-2022, Dusty Groove, Inc.

Toronto Rock & Roll Revival 1969
Sunset Blvd, 1969. New Copy
CD...$8.99 17.99
A searing live set from Chuck Berry – one that's way better than the "rock and roll revival" in the title! In 1969, Chuck was still completely on fire – after making some albums for Mercury that were filled with expansive guitar lines and really great sounds – and about ... CD

Chuck Berry/More Chuck Berry
Chess/BGO (UK), Late 50s/Early 60s. New Copy
CD...$4.99 16.99
A double-helping of Chuck Berry brilliance from his early years on Chess Records – music that always has way way more to offer than you might think! Sure, some of Chuck's hits are very familiar – and sure, the man could later be a bit of a parody of himself – but there's no ... CD