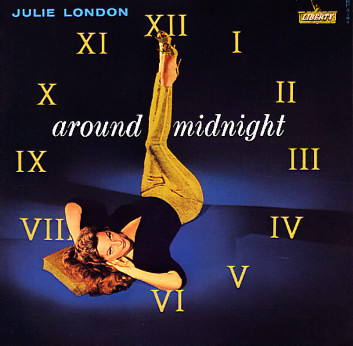 Around Midnight's just about the best time to listen to Julie London – especially given her sultry late nite style of singing! This album's one that definitely follows in that mode – setting Julie's vocals to backings by Dick Reynolds – a bit fuller than some of her earliest Liberty albums, but still quite moody, and very much in the best spirit of the album's songs of adult love and loss. The song choices are especially great too – with some key mid-century classics that include "In The Wee Small Hours Of The Morning", "Lush Life", "Lonely Night In Paris", "Something Cool", and "You & The Night & The Music". All that – and a great cover that has Julie posing as the hands of a clock!  © 1996-2022, Dusty Groove, Inc.