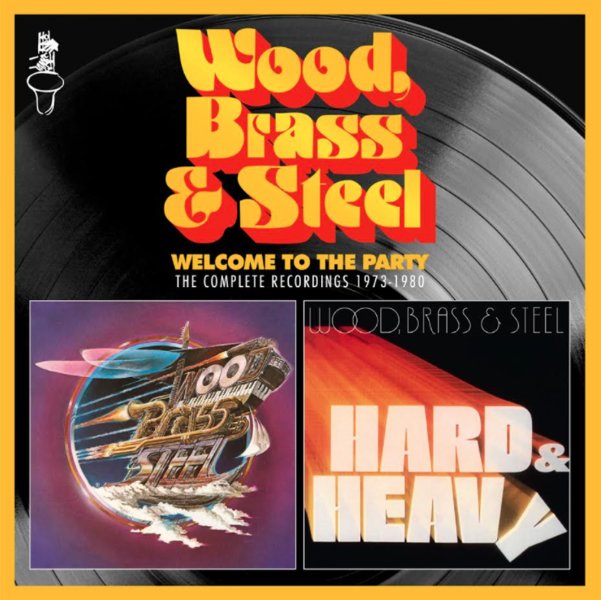 An essential collection of work from one of the hippest funk groups of the 70s – the mysterious Wood Brass & Steel, who also participated in the legendary Skullsnaps record! The first part of the set features an unreleased album that the group recorded for the All-Platinum label in 1973 – music that's hard and funky, but which also shows a strong current of jazz as well – the kind of material that has the group very much in the best Earth Wind & Fire territory of the period, with a sense of righteous perfection that should have made them huge – had the album not stayed in the vaults! The set includes their fantastic "Hey What's That You Say" – which was later reworked as "It's A New Day" for the Skullsnaps album – plus a few more cuts that later appeared on the Brother To Brother debut album – titles that include "Trespassing", "Let's Take A Stroll", "Jermilah", "If He Can Do It She Can Do It", "I Wish It Would Rain", and "A Love Of My Own". Next is the self-titled Wood Brass & Steel album – a legendary bit of east coast funk from the 70s – by a group who'd go on to have a huge influence both in the worlds of hip hop and house! Wood Brass & Steel feature two key players who later became part of the Sugarhill Records house band, and later the On-U Sound collective – Doug Wimbush and Skip McDonald – but the set's got a much fuller, more soulful vibe than work from those later projects – nice use of horns, as hinted at in the title – but not in a way that make these guys a brassy funk band either! Instead, there's a smooth groove throughout – one that comes up from the rhythms first, with a wonderful quality that's years ahead of its time – never disco, but not afraid of some faster rhythms that point the way towards underground club to come. The whole thing's the kind of funky lost gem that makes us happy to do what we do – and it's had long life over the past few decades, thanks to the rich variety of tunes on the set. Titles include the classic cut "Funkanova", an uptempo jazzy instrumental that continued to be a club favorite throughout the house years – plus loads of other good cuts, too, like "WBS Theme", "Welcome To The Party", "Same Ol Me", "Working On A Dream", and a version of "Always There". Hard & Heavy is the incredibly rare second album from Wood Brass & Steel – the mighty funk group we've loved for years for their landmark debut from the mid 70s! This sophomore set is from a few years later, and has the group honing their groove even more – working with these righteous currents in their music that expand the sound into territory that's almost a bit like Roy Ayers at times! As with Ayers, the vocals are often layered into the rhythms – sometimes sung by group members with this soulfully flowing current that has a subtle, sublime sort of vibe – and which works perfectly for the message in the music. Tunes are often in the faster side of midtempo – but never conventional club or disco at all – and there's this really special quality to the whole record, one that even tops the unique vibe of their first album. The original album was very briefly issued by Sugar Hill, during a time when the label was mostly doing hip hop – and is impossibly hard to find in the original pressing. Titles include "Open Up Your Heart", "Be Yourself", "Long Live Music", "Space Walk", "Fly With Music", "Superstar", and "Are You Busy".  © 1996-2022, Dusty Groove, Inc.