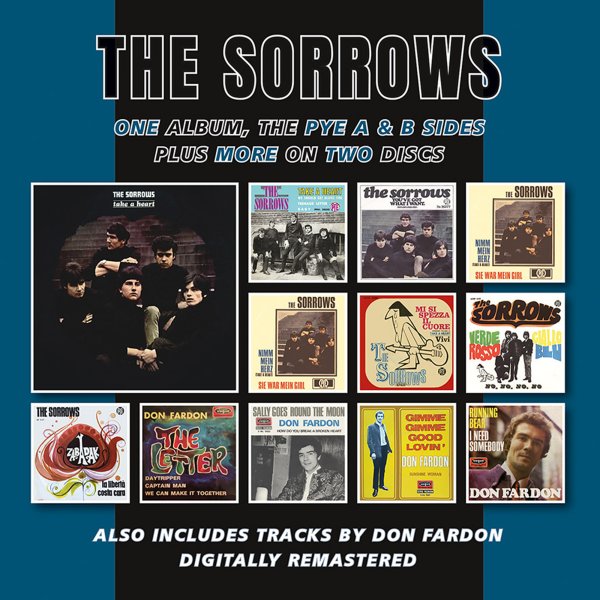 A huge package of material from The Sorrows – one full album, a wealth of rare singles, and even some solo material by group member Don Fardon too! The set begins with the album Take A Heart – a searing set from the mid 60s wave of the British scene – delivered with this mix of tunefulness and raw guitars that's totally great, echoed most strongly in the vocals, which really have an edge, even when delivering familiar themes on the lyrics – moodier than most, and in a really great way! The set then moves into a massive 28 more tracks that make up the a-sides and b-sides of the group's singles for Pye Records at the time – titles that include "Baby", "Gonna Find A Cave", "We Should Get Along Fine", "Pink Purple Yellow & Red", "My Gal", "Don't Sing No Sad Songs For Me", "Hooky", "Vivi", "Armchair King", and "Smoke Gets In Your Eyes". The set then concludes with 10 more solo tracks from Don Fardon – some of the hardest to find material in the collection, and some of the most interesting too. Titles include "Lament Of The Cherokee Reservation Indian", "Daytripper", "Coming On Strong", "Ruby's Picture On My Wall", "We Can Make It Together", "Dreamin Room", and "I Need Somebody". 50 tracks in all!  © 1996-2023, Dusty Groove, Inc.