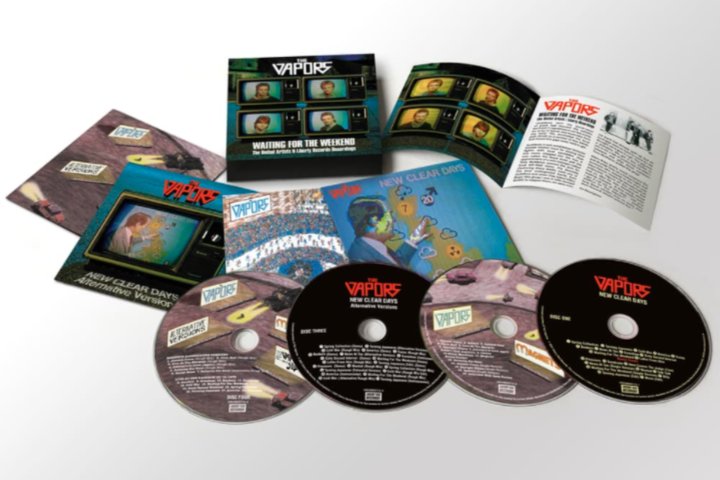 Your collection of work by The Vapors just got a whole lot bigger – because this 4CD set adds a lot to the group's small catalog that originally just included two full albums! First up is the album New Clear Days – a set that's maybe best remembered for one big hit, but which has a rock-solid sound all the way through! The group hail from the UK, and they've got a strong sort of Jam flavor going on here – songs that are short and fast, but super-catchy too – more tunefulness than snark, with a small current of politics in the mix too! That one hit is "Turning Japanese" – a song that most folks know, even if they don't know the group's name – and it's nestled nicely here alongside cuts that include "Waiting For The Weekend", "Letter From Hiro", "News At Ten", "Sixty Second Interval", "Cold War", and "Spring Collection". Next up is Magnets – the overlooked second album from The Vapors – a set that's every bit as tuneful and catchy as their first – a blend of early punk modes with a growing sense of songcraft – maybe in the same place at the moment as work by The Undertones, or even The Jam – with whom the group have a bit of a connection! As with their debut, the set's filled with catchy songs that should have gotten them a lot more play at the time – a nice edge, and never too polished for a bigger label – with titles that include "Can't Talk Anymore", "Johnny's In Love Again", "Spiders", "Isolated Case", "Live At The Marquee", "Daylight Titans", and "Magnets". 4CD set features 54 more bonus tracks – including alternative versions of both of the core albums, a Live At The Rainbow set from 1979, and titles that include "Galleries For Guns", "Jimmie Jones (single)", "Sunstroke", "Prisoners", "Here Comes The Judge (live)", "Billy", "Wasted", "Talk Talk", and "Move (demo)".  © 1996-2021, Dusty Groove, Inc.