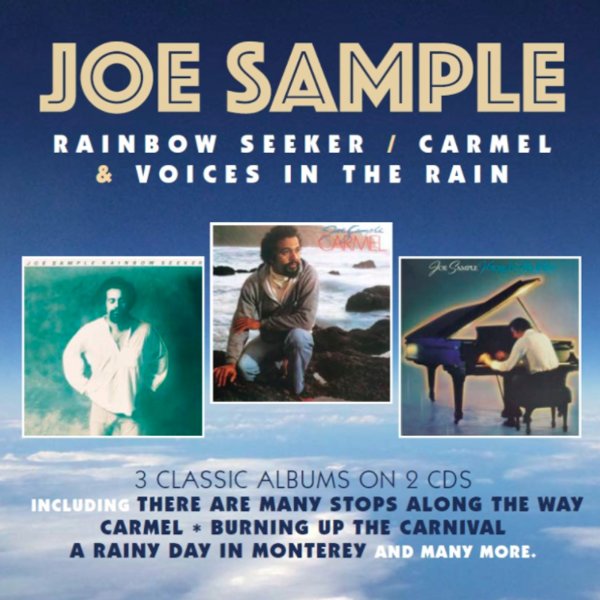 Rainbow Seeker/Carmel/Voices In The Rain (with bonus tracks)

A trio of early solo albums from Joe Sample – with bonus cuts too! First up is Rainbow Seeker – a sublime solo set from the great Joe Sample – a set recorded right at a time when his work with The Crusaders was breaking very big, and Joe was becoming one of the hottest fusion keyboardists of the 70s! This set gives Sample a nicely different focus than The Crusaders – more keyboards in the lead, with a great mix of acoustic piano and electric modes – over these really well-crafted arrangements that feature key Crusaders members, but also allow for great work from David D Walker on guitar, Fred Jackson on tenor, and some other great west coast studio talents too. The vibe is great – almost a Steely Dan jazz album, and we mean that in the best way possible – on titles that include "Rainbow Seeker", "Fly With The Wings Of Love", "In All My Wildest Dreams", and the classic "There Are Many Stops Along The Way". Carmel is a masterpiece of smooth fusion, and a landmark album of easy jazz that spawned countless imitators that could never hope to match Sample's simple and elegant use of funky riffing and lyrical chords – coming in with just the right dash of darkness when the record's in danger of sounding too light. Most of the rest of the Crusaders had a hand in the record, and the set's got the smooth west coast sound you'd expect from the title. Tracks include "Carmel", "Cannery Row", "Sunrise", and "More Beautiful Each Day". Voices In The Rain has an approach that has Joe hitting some more sophisticated acoustic passages at points, while still opening up into the soulful groove we'd expect from his legacy as a core member of The Crusaders! Sample plays both acoustic and electric keys on the album – and the whole thing's a perfect part of that mighty run that Joe gave us with his solo work on MCA – music that's every bit as great as Crusaders albums of the time, and which we continue to love a lot more than some of Sample's later albums. The sound is never overdone, or too commercially produced – and there's a balance of acoustic elements that later 80s fusion always seemed to forget. Flora Purim sings a bit on the record – but most of the set is instrumental – and titles include "Shadows", "Burnin Up The Carnival", "Greener Grass", "Eye Of The Hurricane", and "Dream Of Dreams". 2CD set features three bonus tracks – single versions of "Melodies Of Love", "Dream Of Dreams", and "Burning Up The Carnival".  © 1996-2021, Dusty Groove, Inc.