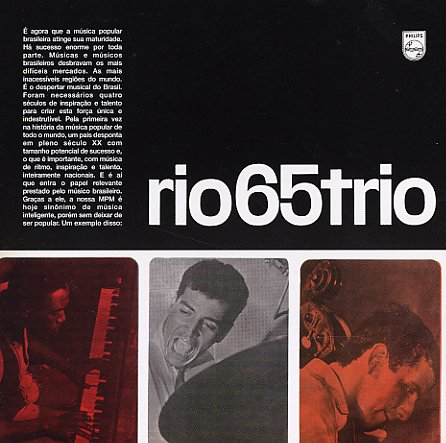 A brilliant record right from the very first note! This amazing first album by the Rio 65 Trio is a solid gem all the way through – a magical moment in the recording studio, and a record that forever changed the face of bossa! The trio features piano work by jazz legend Dom Salvador – playing in a freewheeling and open-handed style that evokes far more moods, tones, and colors than you'd get from the average bossa session – supported by drummer Edison Machado and bassist Sergio Barroso, both of whom manage to be tight and loose at the same time, grooving in modes that are simply stunning all the way through. A true treasure, and one that we'd never pass up! Filled with great cuts that include "Meu Fraco E Cafe Forte", "Farjuto", "Sonnymoon For Two", "Tem Do", "Azul Contente", "Mau Mau", and "Minha Namorada".  © 1996-2021, Dusty Groove, Inc.