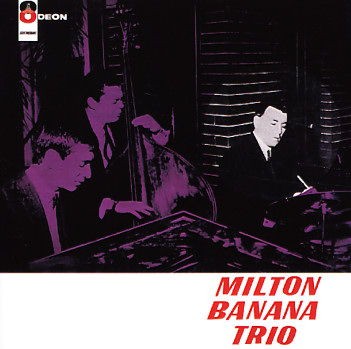 Sublime bossa jazz from one of the greatest combos on the Brazilian scene of the 60s – the crackling trio led by drummer Milton Banana, a really tremendous player no matter what the setting! The album bristles with energy from the very first note – virtually a blueprint for the sound of bossa piano in the 60s, with some great acoustic work here from Walter Wanderley on piano, and basslines that have a quick-spirited sense of timing to match Milton's drums. Tracks are all short and very tight, with a great sense of jazz – leaping along the grooves with titles that include "Samblues", "Noa Noa", "Primavera", "Samba De Verao", "Primitivo", and "Sambou, Sambou".  © 1996-2021, Dusty Groove, Inc.

Quem e Quem
EMI (Japan), 1973. New Copy
CD...$13.99
A gem of a record – one we wouldn't part with for anything! Joao Donato's best known as one of the founding fathers of bossa nova – better known for his 60s work over the years, than he was for 70s electric work like this. Fortunately, international groove hounds picked up on the ... CD