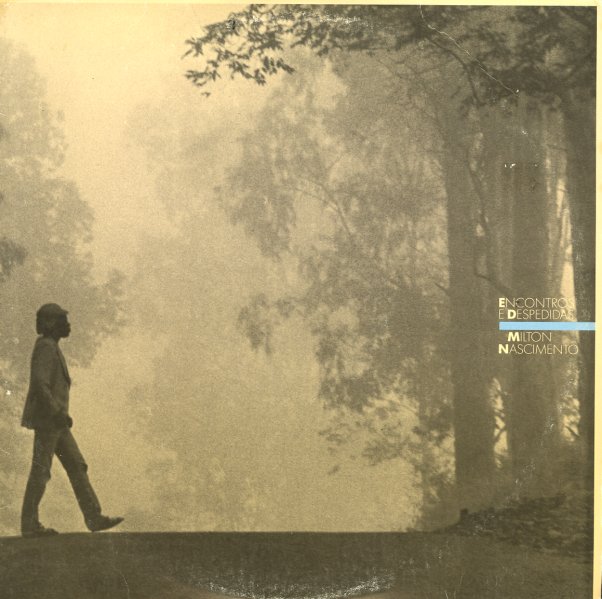 A nicely understated 80s set from Milton Nascimento – a record that still has that heavenly, soaring sensibility in his vocals – but which maybe also has some of the intimacy you might expect from the cover's image of Milton walking alone in a forest! There's some jazzy currents in the music, but just a bit – and the set does include contributions from Pat Metheny and Hubert Laws – but the vibe is very much Nascimento's own, on titles that include "Lagrima Do Sul", "Raca", "Quem Perguntou Por Mim", "A Primeira Estrela", "Encontros E Despedidas", "Mar Do Nosso Amor", and "Vidro E Corte".  © 1996-2022, Dusty Groove, Inc.

Milton Nascimento Ao Vivo
Barclay/Universal (Japan), 1983. New Copy
CD...$7.99 (LP...$6.99)
A live album from Milton Nascimento, but a set that's got all the majesty of his studio work of the 70s – thanks to a core group that's really wonderful, and some larger orchestrations that must have taken up a fair bit of space on the stage! Nascimento's got that wonderfully expressive ... CD

Anima
Mercury (Japan), 1982. New Copy
CD...$7.99
An ambitious early 80s session from Milton Nascimento – done in the style begun by his Minas and Geraes albums, and infused with an ever-growing sense of soul that makes even the mellower numbers sound great! There's a more popular approach to the songwriting here – one that goes a bit ... CD

Geraes
Odeon/EMI (Japan), 1976. New Copy
CD...$9.99
Beautiful stuff – and one of Milton Nascimento's greatest albums of the 70s! The style here is a bit more subdued than on some of his later work – but in a way that's really majestic and soulful, showing the further development of Milton's unique idiom as he becomes one of the ... CD