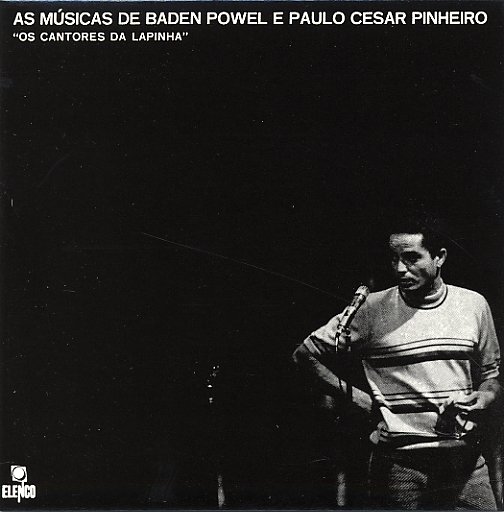 One of the most striking albums recorded by Baden Powell for the Elenco label in Brazil – a post-bossa affair that's filled with lots of lively samba touches! The feel is quite different than some of Powell's earlier recordings – as the tunes bounce and dance along on a highly percussive groove – often mixing Baden's guitar with chorus vocals that dip and turn nicely with the rhythms of the set. The recording quality is great, too – airy and spacious, yet still warm enough to capture Baden at his fragile best, and highlight the vocals by Paulo Cesar Pinheiro. Titles include "Lapinha", "Aviso Aos Navegantes", "Vou Dietar E Rolar", "Carta De Poeta", "Violao Vadio", and "Samba Do Perdao".  © 1996-2021, Dusty Groove, Inc.

A Vontade
Elenco/Universal (Japan), 1963. New Copy
CD...$13.99
Killer early bossa by Baden Powell – a jazzy little gem that still shines brightly after all these years! This early album is a stripped-down batch of tunes that features Baden on acoustic guitar, backed by a small percussion combo that really keeps things lively – plus some additional ... CD

Baden Powell Swings With Jimmy Pratt
Elenco/Universal (Japan), 1963. New Copy
CD...$13.99
One of the greatest Baden Powell albums of the 60s – a beautiful little set that's co-crafted by the bossa guitarist and Brazilian drummer Jimmy Pratt! The arrangements are a bit unusual for Powell – and feature lots of small combo woodwinds grooving around the tight percussion of ... CD