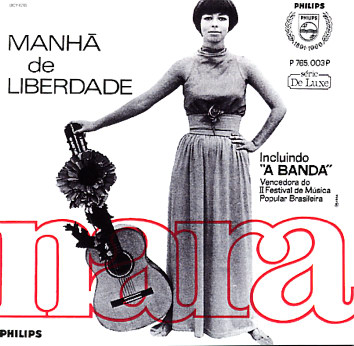 A beautiful early gem from Nara Leao! This one has a similar feel to her classic O Canto Livre album – in that it's got a deeper approach than some of her bossa work, with a mix of some of the more complicated, slightly folksy styles used by singers like Geraldo Vandre or Chico Buarque De Hollanda. The sound is wonderfully dark – a moodier approach to the music than used by some of Nara's contemporaries – without any of the sweeter styles you'd get from other Brazilian female singers of the 60s. Titles include Nara's great single "A Banda", plus "Favela", "Funeral De Lavrador", "Cancao Do Bicho", "Faz Escuro Mas Eu Canto", "Ladainha", and "Ana Vai Ambora". Arrangements by Geni Marcondes – and a great cover! CD features 2 bonus tracks – "Funeral De Um Lavrador (French)" and "Diz Que Fui Por Ai (live)".  © 1996-2022, Dusty Groove, Inc.