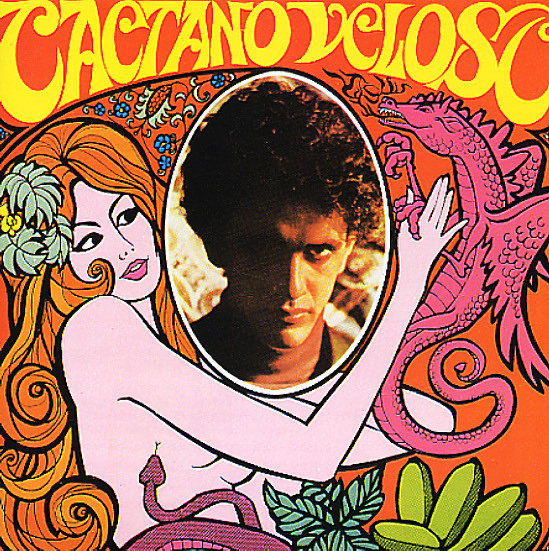 One of the building blocks of the late 60s Tropicalia scene in Brazil – and a standout solo debut from the young Caetano Veloso! The album's got an approach that's as dynamic and trippy as its cover image might imply – the same amazing blend of sounds and styles you'd hear on contemporaneous records by Gal Costa or Os Mutantes – served up with similar wit, wisdom, and charm! Caetano's vocals are amazing throughout – filled with raspy power that goes beyond the barriers of language – and the production has loads of surprising elements tripping through the mix – some rootsy, some slightly orchestrated – but with a softer approach that resonates strongly with more psychedelic use of organ and guitar. The album's as powerful today as it was decades ago – an essential recording that holds up beautifully year after year! The kickoff track is "Tropicalia" (surprisingly enough!), and the album is a non-stop ride through gems like "Alegria, Alegria", "Onde Andaras", "Paisagem Util", "Ave Maria", and the groovy "Soy Loco Por Ti America", written by Gilberto Gil. 2 bonus tracks – we THINK from the original Japanese releases: "Yes, Nos Temos Banana" and "Ai De Mim, Copacabana".  © 1996-2021, Dusty Groove, Inc.

Livro
Polygram/Universal (Japan), 1997. New Copy
CD...$13.99 (CD...$4.99)
A great 90s album by Caetano Veloso – a beautiful re-awakening of his genius in the later years of his career! The sound here is as fresh, creative, and personal as on some of Veloso's best post-Tropicalia albums of the 70s – served up in a blend of spare percussion, edgey guitars, and ... CD