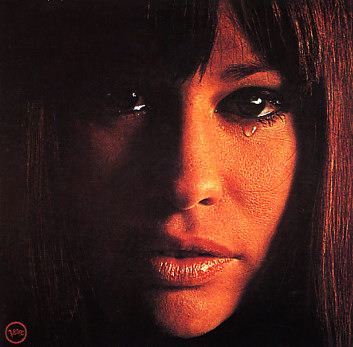 One of the darkest albums ever recorded by Astrud Gilberto – her 60s last session for Verve Records, and a batch of beautifully moody tunes throughout! Arrangements are by Albert Gorgoni, who'd handled Gilberto's previous September 69 album – but the style here is a bit mellower, a bit sadder – touched with more adult themes of love, life, and loss – and very much in keeping with Astrud's tear-stained image on the cover! There's a sound here that almost mixes Gilberto's earlier bossa with the more baroque modes of Scott Walker at the end of the 60s – and as with Scott Walker's classic solo sets, the album shows a side of Astrud's talents that we never would have expected a few years earlier! Titles include "Wailing Of The Willow", "Where's The Love", "Wee Small Hours", "If", "Without Him", "Trains & Boats & Planes", "The Sea Is My Soil", and "Didn't We?".  © 1996-2021, Dusty Groove, Inc.