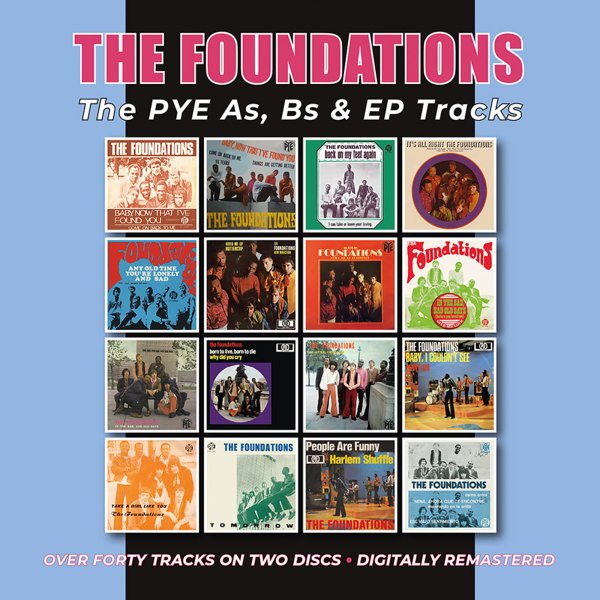 Most folks know The Foundations for one big crossover hit that still gets a lot of oldies radio play – but the group have a heck of a lot more to offer than that, as you'll hear in this wonderful collection that not only features all their 7" single releases from the UK, but also includes later solo material from the group's lead singer, Clem Curtis! The group were initially a bunch of British lads inspired by the sound of Motown, and they hooked up with Curtis, a singer from Trinidad – who really gave them the sound they wanted in the lead, and helped further the important identity of the group as a mixed-race act. Their sound is wonderfully tight – kind of a small group take on the larger studio majesty of Detroit soul – but with some nice British touches too, and a great sense of songwriting that gave the group plenty of original material along the way – a good deal of which you'll hear on this set. The 2CD package features 39 single tracks by The Foundations – including "Back On My Feet Again", "Come On Back To Me", "I Can Take Or Leave Your Loving", "Am I Grooving You", "New Direction", "Jerking The Dog", "Baby Now That I've Found You", "In The Bad Bad Old Days", "Born To Live Born To Die", "Solomon Grundy", "Till Night Brought Day", "Waiting On The Shores Of Nowhere", and "Build Me Up Buttercup". Also includes mid 70s solo work by Clem Curtis – five more tracks that include "Point Of No Return", "Time Alone Will Tell", "Mountain Over The Hill", and "I've Never Found A Girl".  © 1996-2022, Dusty Groove, Inc.

Bio/Chuck Berry 75
Chess/BGO (UK), Early 70s. New Copy
CD...$9.99 18.99
A pair of 70s albums from the great Chuck Berry – back to back on a single CD! First up is Bio – an overlooked early 70s set from the legendary Chuck Berry – one that has him in a really great setting that shows just how much Chuck continued to grow over the years! Sure, plenty ... CD

New Religion/London Swings/This Is Jimmy James & The Vagabonds/Open Up Your Soul (plus bonus tracks)
Pye/BGO (UK), Late 60s. New Copy 2 CDs
CD...$8.99 20.99
Four classic albums from this hip British soul group – issued here in a single set, with bonus tracks too! First up is New Religion – a record that was also released in America by Atlantic Records. Although they were a UK soul act, Jimmy James and The Vagabonds were a perfect match ... CD