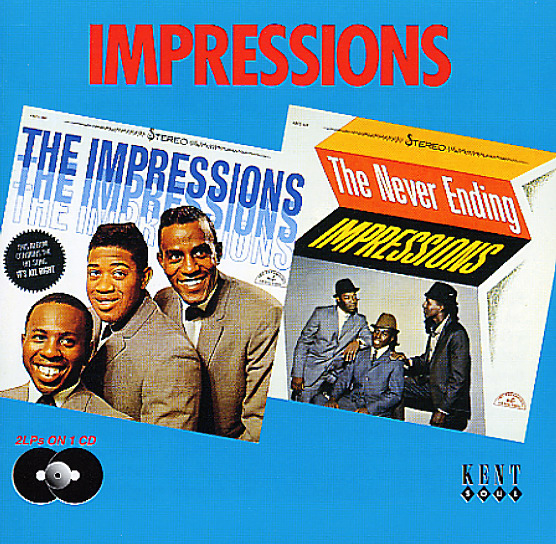 2 early gems from The Impressions – back to back on a single CD! First up is the self-titled Impressions – fantastic soul from the Chicago scene of the 60s – the legendary first ABC album by Curtis Mayfield and The Impressions! Although the group first broke big on Vee Jay Records, it was at ABC that their genius really took flight – tightening up the harmonies of the earlier singles, and hitting a mode that was a lot more soul than the doo wop of their roots! The sound here is a great bridge between the two eras of the group's career – and a number of the best tracks here are done in a mellow, gentle sort of way that relies heavily on the harmonies – crackling out with beautifully human sounds throughout. Nearly every tune is an original by Curtis Mayfield – and there's not a spot of filler on the album! Titles include "Minstrel & Queen", "Gypsy Woman", "Never Let Me Go", "Sad Sad Girl & Boy", "Little Young Lover", "Can't You See", and "I Need Your Love". Nice cover, too – with Curtis smiling the biggest ol' bucktoothed smile you'll ever see! Never-Ending Impressions is a major winner from The Impressions! Virtually all of their material for ABC was excellent – and this LP is no exception, as it's got loads of original Curtis Mayfield compositions, and plenty of great arrangements by Chicago soul legend Johnny Pate. The group is extremely soulful at this point – and they sound great on just about every cut. Titles include "Ten To One", "I'm So Proud", "Sister Love", "Little Boy Blue", "Girl You Don't Know Me", "I Gotta Keep Movin", and "A Woman Who Loves Me".  © 1996-2022, Dusty Groove, Inc.