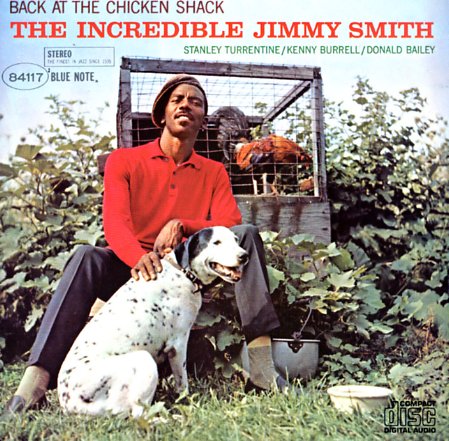 Back At The Chicken Shack (180 gram pressing)

A partner album of sorts to Jimmy Smith's classic Midnight Special album – recorded during the same sessions as that one, and also featuring Stanley Turrentine on tenor and Kenny Burrell on guitar! The sound here is almost even more open and stretched out – with only 4 long tracks on the album, 2 on each side – all offering up plenty of room for Jimmy to hit the Hammond with that keenly imaginative approach to a solo he was showing at this time – a style that proved that the instrument could do a lot more than just make weird noises or pump up the rhythm. Turrentine's tenor more than matches Jimmy's solos for imagination – and titles include "When I Grow Too Old To Dream", "Messy Bessie", "Minor Chant", and "Back At The Chicken Shack".  © 1996-2021, Dusty Groove, Inc.
(Part of the Blue Note Classic Vinyl Series!)

Root Down (180 gram pressing)
Verve, 1972. New Copy (reissue)
LP...$23.99 25.99
Once an overlooked late Verve album, now a solid classic – and easily one of the funkiest albums ever from organist Jimmy Smith! The groove here is far different than the more familiar Jimmy Smith Verve sessions of the 60s – and the tracks open up in a really extended mode – ... LP, Vinyl record album