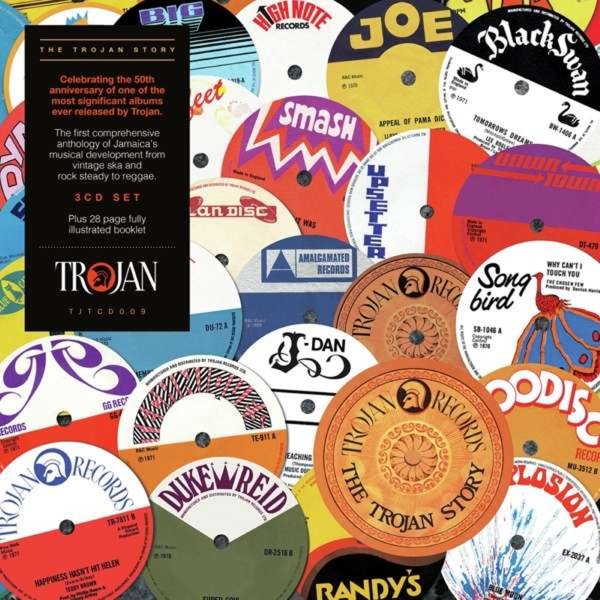 A huge collection of work from the legendary Trojan Records label – the crucial British imprint who helped bring the sounds of Jamaica to the London scene, then helped encourage a lot of new English recordings as well! Trojan was more than a label, it was a key cultural conduit back in the day – as important to musical migrations as those of its customers' own – as you'll hear in this massive collection of tracks from the label's glory days! The set is much nicer than just a "best of" – as it's full of unusual numbers mixed in next to the classics – a set of 50 tracks that includes "Give Me All Your Love" by The Continentals, "Tell Me Darling" by Jackie Edwards, "One Eyed Giant" by Baba Brooks, "Keep The Pressure On" by Winston & George, "Perfida" by Phyllis Dillon, "King Without A Throne" by Sugar Simone, "Rock Steady Train" by Ewan & Jerry, "Rasta Never Fails" by The Charmers, "Them A Laugh & A Ki Ki" by The Soul Mates, "People Funny Boy" by Lee Scratch Perry, "I'm In The Mood For Ska" by Lord Tanamo, "Satan" by Justin Hinds & The Dominoes, "Rough & Tough" by Stranger Cole, "Man To Man" by Kentrick Patrick, "Rudy A Message To You" by Dandy Livingstone, "Way Of Life" by Lynn Taitt & The Jets, "Every Night" by Joe White & Chuck, "Hong Kong Flu" by The Ethiopians, and "Nana" by The Slickers.  © 1996-2021, Dusty Groove, Inc.