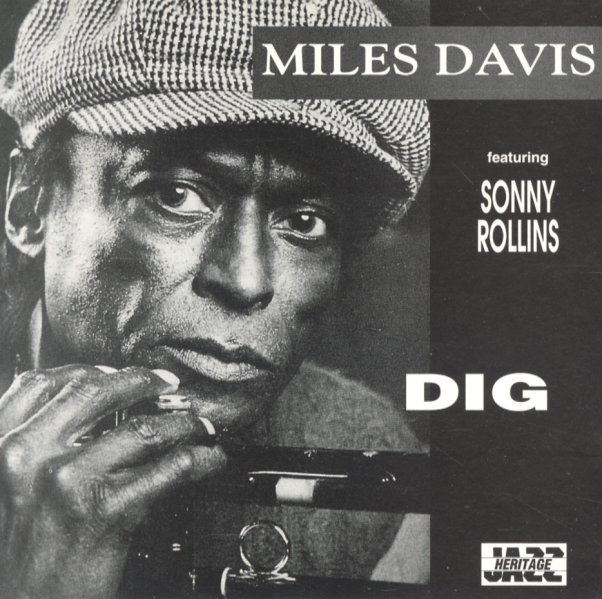 A key early appearance on record by Sonny Rollins – recorded here with Miles Davis and Jackie McLean in the landmark Dig session! The album's the stuff that 50s bop dreams are made of – a session that has up-and-coming modernists working in the new freedom of the long playing record, in a way that allows them to break past the shorter, more urgent sound of the 78rpm single! Rollins is young, but a surprisingly strong voice on the set – and Jackie McLean's alto is incredibly sharp at this point, with strong hints of the genius to come later in the decade. The rest of the lineup includes Walter Bishop on piano, Tommy Potter on bass, and Art Blakey on drums – and tracks include Miles' classic version of "It's Only A Paper Moon", plus "Denial", "Out Of The Blue", "Dig", and "Bluing".  © 1996-2021, Dusty Groove, Inc.

John Coltrane & The Jazz Giants
Prestige, Late 50s. Used
CD...$5.99
Plenty of jazz giants here – some of the biggest heavyweights of John Coltrane's generation, working here either as leaders of the dates, or sidemen on some of Coltrane's earliest recordings for Prestige! The package features material originally issued under the names of Miles Davis, Tadd ... CD

Blow Arnett, Blow
Prestige/OJC, 1959. Used
CD...$11.99
Blow Arnette does, at that – a killer tenor groove that's augmented here by some additional work from Eddie Lockjaw Davis! The pair really let loose on some of the tunes here – blowing in that older "battle" mode at points, but also laying back at times too – hitting a ... CD