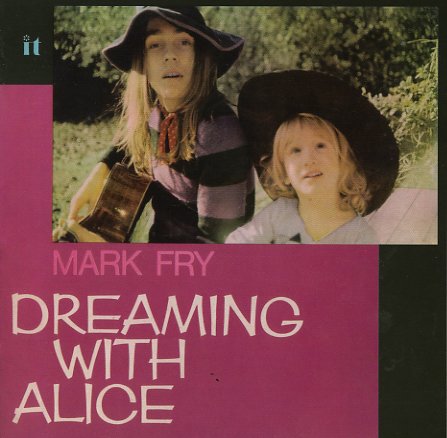 Dreaming With Alice (with bonus tracks)

Mark Fry was just a young lad when he recorded this album – as you might guess from the cover – a Brit staying in Italy, where he cut this rare gem that's gone onto legendary status over the years – a set that's maybe circulated in far more unofficial copies than its original release! The style is a bit hard to peg – not the traditional folk of the UK scene of the time, but equally acoustic overall, and touched with some occasional older instrumentation – yet delivered with a much trippier vibe, maybe even more in a mode that points towards more addled sounds that would emerge later in the next decade. The structure is great – with some poetic "Dreaming With Alice" passages between most songs – and titles that include "Mandolin Man", "Down Narrow Streets", "The Witch", "A Norman Soldier", "Lute & Flute", and "Roses For Columbus" – all beautifully dark, yet dreamy. CD edition also includes previously unreleased recordings from the 70s!  © 1996-2021, Dusty Groove, Inc.

Idiot (2CD edition – with bonus tracks)
RCA/Capitol, 1977. New Copy 2CD
CD...$9.99 21.99
Iggy's second solo LP proper, and a strangely intoxicataing mix of junkie desperation and gutteral punk funk – a conscious decision to move away from the guitar roar of the Stooges era and closer to the sounds his longtime champion David Bowie was experimenting with at the time, with a little ... CD